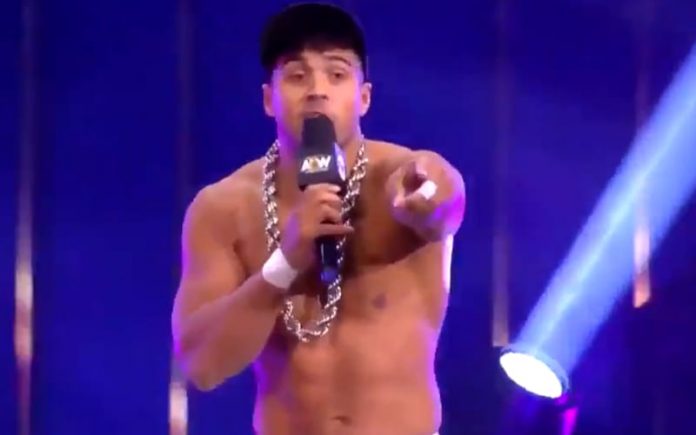 AEW star Max Caster of The Acclaimed has dropped a new freestyle on TMZ Sports, and challenged former WWE Champion Dwayne “The Rock” Johnson to meet him in the ring on AEW Dynamite. Caster appeared on TMZ Sports this week with Mike J. Babcock and former WWE Superstar Mojo Rawley for a new “Platinum Max Monday” segment. This week’s rap included references to Fury vs. Wilder, Jon Gruden, last week’s AEW freestyle in Philadelphia, and more. The rap also included a few lines about The Rock’s debut rap song.

As noted last week, The Rock spit his first bars on the new “Face Off” single with rapper Tech N9ne, Joey Cool, and King Iso. The song reached #1 on the YouTube Trending Music chart, and #1 on the United States Rap chart on iTunes. For those who missed it, you can see the official music video below, and catch Rock’s verse shortly after the 3:00 mark.

Caster called The Rock out in his TMZ freestyle and said, “Yo what up to The Rock, yeah I heard your rap song, why you all up in my lane when Dwayne’s Johnson is that long?, flows weak but the lack’s strong, when the track’s on, you just can’t act on, yo come to Dynamite we can get this match on, yo.”

The Rock has not responded as of this writing. You can hear Caster’s freestyle and Rock’s rap with Tech N9ne below:

Here's my 🔥 freestyle from @TMZ_Sports

AND I challenged @TheRock to a battle on #AEWDynamite @AEW @AEWonTNT #MicDrop 🎤⬇️💥 pic.twitter.com/heZoLGtbYr