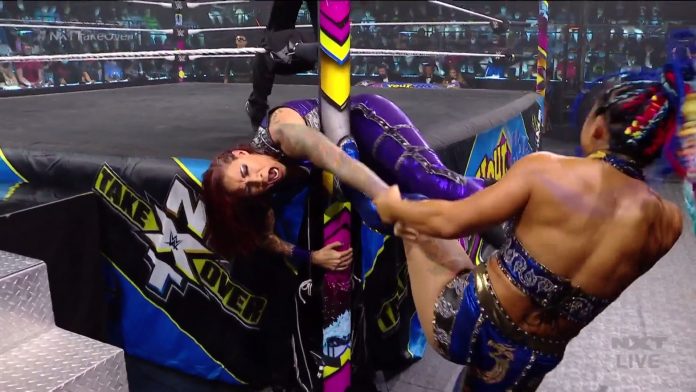 Tonight’s NXT “Takeover: In Your House” event saw Xia Li defeat Mercedes Martinez in singles action. The storyline behind the match was that Li was looking for revenge after Martinez defeated her in the 2017 Mae Young Classic. The match saw Ying watch from her throne on the Takeover set while Boa stood at ringside. Boa got involved towards the end of the match, but Martinez shoved him to the side and continued going for Li. Li ended up winning with a spin kick to the face. After the match, Li called for Boa to hand her a steel chair. She tried to use the chair but Martinez blocked it. Martinez would go on to deliver chair shots to Boa and Li as Ying watched from the stage. Martinez brought Li to the stage and yelled at Ying, calling her a bitch and calling her out to fight. Ying then approached Martinez on the ramp and grabbed her by throat, bringing her to her knees. Martinez fought back with the chair but Ying blocked it and grabbed her by the throat again, using that hold to launch Martinez off the stage and into the Plexiglas barrier. Ying then stood tall on the stage, looking down at Martinez as Boa and Li joined her. The segment ended with all three members of Tian Sha walking away as Vic Joseph declared on commentary that Ying has risen.

It’s been reported that Ying is portrayed by Karen Q. Q worked for several promotions, including ROH and Impact Wrestling, before working the 2018 Mae Young Classic, where she lost to Li in the first round. Q later signed with WWE in February 2019, but suffered a broken leg later that summer, and has been on the shelf ever since then. WWE first started the Tian Sha storyline back in November. Li has picked up several singles wins since then, but this was her Takeover debut, and the first significant action we’ve seen from Ying.

A lot can change in 4 years. #NXTTakeOver @XiaWWE @RealMMartinez pic.twitter.com/RI6TU8gw04

Two of the toughest around look to deliver the punishment as @RealMMartinez clashes with @XiaWWE at #NXTTakeOver In Your House! pic.twitter.com/tNv6ZNKf8z

This is exactly why you must FEAR TIAN SHA. #NXTTakeOver @RealMMartinez @FearTianSha pic.twitter.com/bUQpkPFoeg