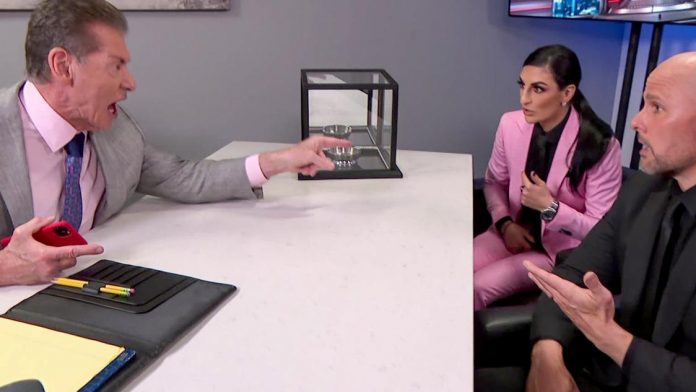 WWE Chairman & CEO Vince McMahon appeared in several segments at Sunday’s Survivor Series pay-per-view. McMahon first appeared during the Kickoff pre-show in a backstage segment where he arrived in a SUV while Adam Pearce, Sonya Deville and the roster waited for him. Vince hopped out of the SUV and received a pop from the roster, and then he revealed Cleopatra’s golden egg from Dwayne “The Rock” Johnson’s new Red Notice film on Netflix, which was the presenting sponsor for the pay-per-view.

The golden egg would be featured throughout the pay-per-view, to build to an angle at tonight’s post-Survivor Series edition of WWE RAW from the Barclays Center.

Vince later appeared in his backstage office, with Cleopatra’s golden egg on display on his desk. WWE Universal Champion Roman Reigns came into the office as Vince wanted to show him something before his main event match with WWE Champion Big E. Vince wanted Reigns to see the egg, which he said was given to him by Reigns’ cousin, The Rock. Vince went on about how The Great One came into WWE with $7 in his pocket, debuted 25 years ago at the Survivor Series in 1996, and now look where he is. Vince insisted the egg was the real deal, not a prop, and claimed he heard it was worth $100 million. The Tribal Chief seemed unimpressed with Cleopatra’s egg or The Rock’s success, and said the value of the egg was about as much as his next contract. Reigns then walked off, leaving Mr. McMahon looking a bit puzzled.

McMahon later appeared in another office segment with Deville and Pearce. He thanked them for their work with RAW and SmackDown, but then noticed that Cleopatra’s golden egg was missing from the display case on his desk. Vince ordered Deville to go call the police, while speculating with Pearce on who could’ve stolen the egg. Pearce said he hated to admit it but the thief could be a Superstar, while McMahon remarked how he hates thieves. He also commented on how The Rock is going to be so upset at the theft. Vince then ordered Pearce to interview everyone to try and figure out who stole the golden egg, and then said if he couldn’t find it before the end of the night, everyone was to be at RAW so they can get to the bottom of this. Michael Cole noted on commentary that the RAW and SmackDown locker rooms will be at tonight’s red brand show for the update on the missing egg.

That was the last we saw of McMahon on the pay-per-view. Pearce made a storyline tweet after the pay-per-view and wrote, “I hope whoever stole this damn egg comes to realize that being a thief is not all it’s cracked up to be.”

WWE has not announced any updates on what might be in store for tonight’s RAW as the hunt for Cleopatra’s $100 million golden egg continues, but we will keep you updated.

If you need me, I’m currently searching for a golden egg. 👀🔎🥚

I hope whoever stole this damn egg comes to realize that being a thief is not all it’s cracked up to be.