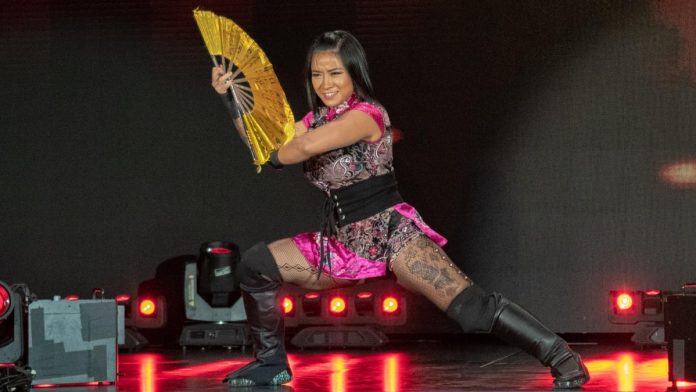 The mysterious storyline with Xia Li and Boa continued during this week’s WWE NXT episode on the USA Network.

Last week’s show featured a segment where NXT General Manager William Regal caught up with Boa at home because he’d been missing for a full week after he was confronted by a mysterious ShiFu (Chinese master) the week before. Boa told Regal that Li was not there, but that “she” would be coming soon. Fast forward to this week and it looks like “she” has arrived. This week’s NXT featured a segment where a disheveled and emotional Xia Li and Boa got into a car, and were driven to a local building. The ShiFu master met them and led them into a warehouse. Boa and Li were taken inside and put on their knees, where they begged for forgiveness and pleaded with another mysterious female figure wearing a cloak. They went on & on about trying as hard as they could but still failing, and needing only one more chance to prove that they can win.

The new mystery person lifted her finger for Boa and Li to stop speaking at one point, and the ShiFu yelled at them to be quiet. The mystery person then marked the hands of Boa and Li, as the ShiFu did to Boa’s hand two weeks ago at ringside. It was believed that the symbol from two weeks ago meant “strength” or “power,” but it looks like this week’s hand symbol may have meant “time.” Li then changed the expression on her face, and looked ready to move forward. The segment ended with flashes of the new mystery woman.

There’s no word yet on who the new mystery woman is, but speculation is that it could be Japanese veteran Meiko Satomura. There’s also fan speculation that this could be Chinese NXT Superstar Karen Q, who teamed with Li several times in 2019. There’s been some speculation that this could be the new role for Mercedes Martinez, who recently had her Retaliation character pulled from the RETRIBUTION storyline. It was reported in late October that the legendary Satomura was beginning to work for the NXT UK brand as a coach and in-ring talent. She previously made her WWE debut in the 2018 Mae Young Classic. Q has been out of action since suffering a broken leg in late July 2019, but she noted in early October that she was making progress and did her first flip since the injury. She resumed in-ring training on September 17.

Social media feedback to the storyline seems to be positive for the most part.