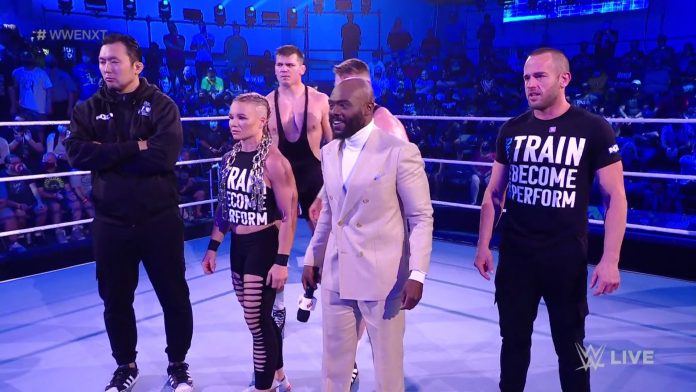 The first female member of The Diamond Mine has been revealed.

After the squash, Malcolm Bivens took the mic and praised The Creed Brothers. He then introduced the first female member of the stable – Ivy Nile. This role is played by Emily Andzulis. The former MMA competitor became the first Female Titan Champion in 2019 when she won The Rock’s Titan Games on NBC. She trained under Tom Prichard and WWE Hall of Famer Kane at their Jacobs-Prichard Wrestling Academy in Knoxville, and signed a WWE deal in January 2020. She worked a few NXT live event matches in 2020, and competed on the August 3, 2020 RAW Underground segment.

The Diamond Mine now consists of Bivens as the manager, Hachiman as the coach, and the four competitors – The Creed Brothers, Nile, and Roderick Strong.

Speaking of Strong, he will finally get his NXT Cruiserweight Title shot next Tuesday night. Champion Kushida made his return after Bivens introduced Nile, and had words for The Diamond Mine. Kushida, who has been out of action after testing positive for COVID-19, challenged Strong to a match tonight, but Bivens proposed they save it for next week. WWE has since announced Strong vs. Kushida for the title on next Tuesday’s show.

Anyone hungry for TOTAL DOMINATION? @DiamondMineWWE's #CreedBrothers are in action NEXT!

"YOU TALK TOO MUCH!"