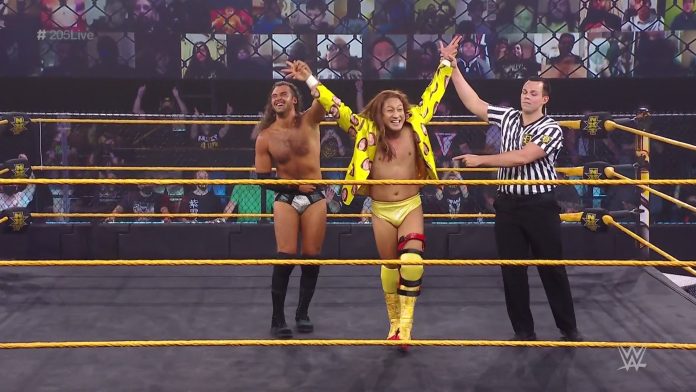 Sterling won his match using a unique front-flip face slam to get the pin. Jiro wrestled with his jacket on during the match. Grey noted that Ikemen translates to “handsome” and due to Jiro’s belief that handsome men wear jackets, he wore his while competing. The finish saw Jiro pin Nese after a kick to the face.

Jiro and Sterling were both announced as members of the December 2020 WWE Performance Center Class, the same group that featured WWE NXT Tag Team Champions MSK and NXT Superstar Tyler Rust. Jiro was known as Sojiru “Ikemen” Higuchi before coming to WWE. He was trained by former WWE Superstar Tajiri, and has competed for AJPW and Wrestle-1 in Japan. Sterling (Alex Brandenburg) was known as Alex Zayne on the indies. He’s been wrestling for 15 years and has worked for promotions like ROH, GCW and Black Label Pro.

Sterling tweeted after the win and thanked everyone for the support. “Honestly there’s no way for me to find the words to thank everyone for the incredible support, from my day one homies to my one day peeps, thank you for every single time you’ve shown love. I promise it’s mutual [folded hands emoji] [purple heart emoji] [orange heart emoji],” he wrote.

Jiro also tweeted after the match and gave thanks. He wrote, “Thank you for world prowrestling funs!!Thank you WWE!! My debut match is over. From now on, I will continue to run in the WWE. This is IKEMEN JIRO!! #WWE #WWENXT #205live”

Get up close and personal with NEW #205Live Superstar Ari Sterling. @AlexZayne pic.twitter.com/7OXWTN64cH

Just when you think you have the advantage, Ari Sterling comes back with a vengeance. #205Live @AlexZayne @BollywoodBoyz pic.twitter.com/s2nuwkfnbT

#AriSterling makes his #205Live debut tonight! Could Samir Singh of the @BollywoodBoyz keep up with "the sauce"? pic.twitter.com/vkYJhGKhlQ

THAT's how you make a #205Live debut. Welcome to the brand, Ari Sterling! 💜 @AlexZayne @BollywoodBoyz pic.twitter.com/Ks94E4rnLy

…and all while keeping his blazer on. You have to admire the commitment. 💛 #205Live @IkemenJiro_wwe @TonyNese pic.twitter.com/BXMlikFGEd

Honestly there’s no way for me to find the words to thank everyone for the incredible support, from my day one homies to my one day peeps, thank you for every single time you’ve shown love. I promise it’s mutual 🙏💜🧡 pic.twitter.com/XHjaI5TAui

My debut match is over.

From now on, I will continue to run in the WWE.