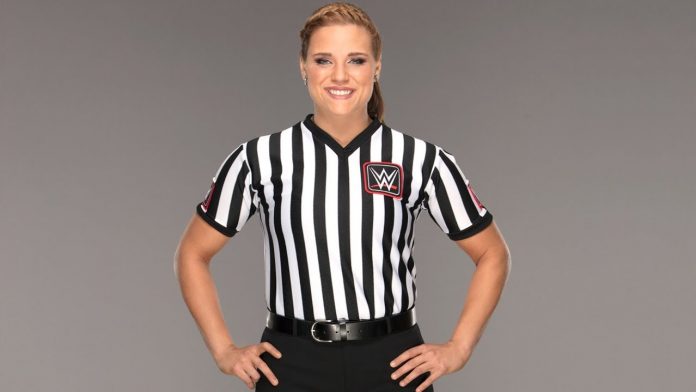 – Above is video of WWE referee Jessika Carr talking to Kayla Braxton backstage at The Mae Young Classic. Carr, who was trained at the Team 3D Academy, is touted as the first full-time female referee. Carr says she can’t begin to put the opportunity into words and the fact that people are trusting her with this position, to have the authority and the respect that she already has. Carr says it’s like a family in WWE and she’s so blessed to be here. Carr also talks about her past as an in-ring competitor and says it’s been a long journey for her. She also talks about losing 70 pounds, how fans & co-workers have reacted to her being signed and more.

– WWE has a new poll asking fans which Total Bellas couple would they rather go on a double date with. As of this writing, 53% voted for Daniel Bryan and Brie Bella while 47% voted for John Cena and Nikki Bella.

– Nia Jax will be participating in a fashion show at The Curvy Con in New York City this weekend. The two-day event brings “plus size Brands, Fashionistas, Shopaholics, Bloggers and YouTubers into one space, to chat curvy, shop curvy and embrace curvy” according to the promoters. Nia wrote the following on participating: