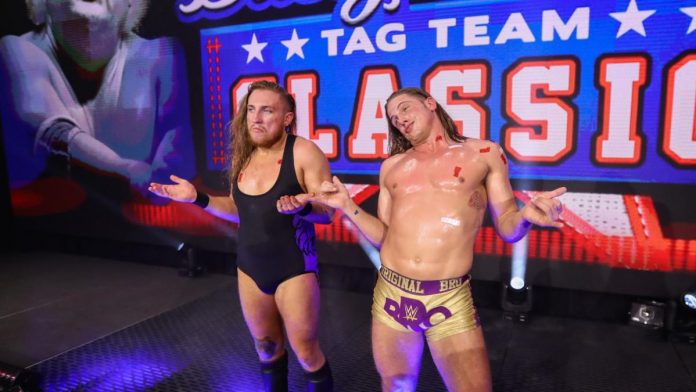 As noted, Matt Riddle and Pete Dunne (The BroserWeights) won the 2020 Dusty Rhodes Tag Team Classic tournament as they defeated Zack Gibson and James Drake (The Grizzled Young Veterans) in the tournament finals during this week’s WWE NXT episode on the USA Network. Riddle and Dunne won the 2020 Dusty Cup trophy, plus a “Takeover: Portland” title shot from NXT Tag Team Champions Kyle O’Reilly and Bobby Fish of The Undisputed Era.

As seen above, WWE released footage of The BroserWeights celebrating with fans inside the NXT Arena at Full Sail University in Winter Park, FL after Wednesday’s show went off the air.

Below is post-show footage of Jon Quasto interviewing Riddle and Dunne about their big Dusty Classic win. Riddle continued to make Dunne feel slightly uncomfortable, and said they are taking the trophy on tour.

“It feels good and it feels even better knowing we get a title shot at Portland Takeover. You know, it’s been a nice ride with Pete and I think the ride’s gonna get even sweeter. God, I love looking at you,” Riddle jokingly said to Dunne. “And this trophy, this isn’t just some one night thing. We’re taking this baby everywhere we go, and we’re taking it to Portland when we win the tag team championships. I know Pete’s thrilled about the whole adventure, and I can’t wait.”

Riddle asked, “How exactly do you plan to get that to Portland?”

“Trust me, bro.. Where there’s a will, there’s a way,” Riddle promised.

“Takeover: Portland” will take place on Sunday, February 16 from the Moda Center in Portland, Oregon, and will air live on the WWE Network. Other matches advertised as of this writing are Tommaso Ciampa vs. NXT Champion Adam Cole, Bianca Belair vs. NXT Women’s Champion Rhea Ripley, and Finn Balor vs. Johnny Gargano.