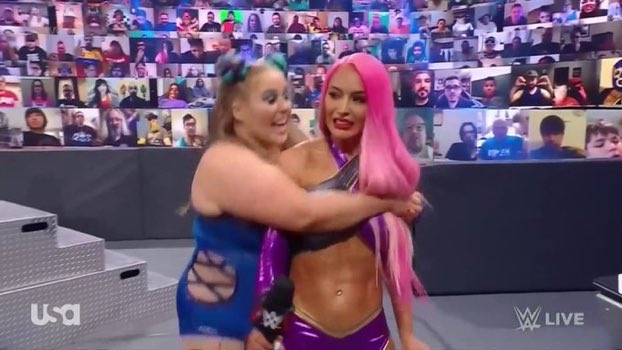 Eva Marie made her return to WWE RAW on tonight’s show, and brought WWE NXT UK Superstar Piper Niven with her. WWE previously announced Eva vs. Naomi in singles action for tonight’s show. Eva came out to the stage with Niven, and walked behind her as Niven rushed the ring. Niven then told a confused referee to ring the bell as she would be competing.

Niven then went on to dominate Naomi and finish her off with a Michinoku Driver in the middle of the ring. After the match, Eva took the mic at ringside and announced herself as the winner, even though she never stepped foot in the ring. Niven left the ring after the win and hugged Eva at ringside as the two celebrated, but while Eva also looked to cringe a bit.

Niven was not identified by the announcers, and it’s believed that she will be given a new ring name soon. There’s no word on if Eva will actually wrestle now that she’s back, but it was previously reported that she would be used as a vehicle to get a new RAW Superstar over. It looks like Niven is in line for that push.