The “major announcement” that Jim Ross teased on Monday regarding the future of WWE video games has been revealed.

WWE and THQ have announced that the “SmackDown vs. RAW” series is being retired in favor of annual “WWE” releases. The first installment, WWE 12, will be released this fall. The game’s tagline, which is straight from the “New WWE” marketing playbook, is “Biggger, Badder, Better.”

“WWE currently doesn’t have brand wars, and the shows themselves are rarely competing against each other, so Smackdown vs. Raw as a name doesn’t really have a meaning.”

Between WWE’s coveted video game franchise being renamed and the company scrapping it’s annual RAW vs. SmackDown PPV event Bragging Rights, it should be interesting to see how much longer WWE keeps the two brands separate on television. 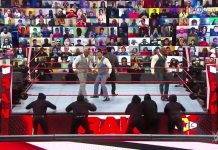 Video: Edge Talks About Pitch He Made For Rated R Title

Video: The Undertaker In Commercial For WWE 2K Battlegrounds