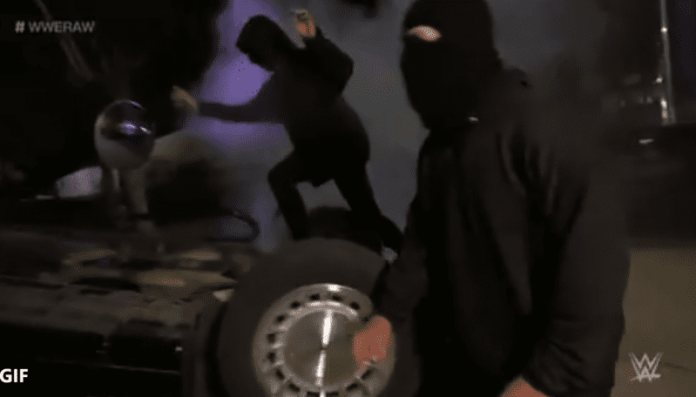 RETRIBUTION returned to cause more chaos during this week’s WWE RAW episode.

While they did nothing like the invasion of last Friday’s SmackDown show, the masked men and women threw cinderblocks through a front window of the WWE Performance Center, and later turned over a car in the parking lot. The mystery group did not attack anyone this week, but they did threaten a security guard who tried to stop them from vandalizing the Performance Center window.

As they have in the last week, the group brought technical glitches with them again on Monday’s RAW, mainly issues with the lights inside the Performance Center.

WWE is still keeping a tight lid on the identities of the RETRIBUTION members. As noted before, the members who have been used under the masks and hoodies for the RAW and SmackDown angles are reportedly not the actual Superstars who will be revealed as the characters of the group.

Stay tuned for updates on the RETRIBUTION faction. Above is video from this week’s RAW angle, and below is WWE’s teaser announcement on the group:

After another night of technical issues plaguing Monday Night Raw, cameras caught the masked group known as RETRIBUTION again wreaking havoc on the WWE Performance Center. In the aftermath of their shocking takeover of Friday Night SmackDown, RETRIBUTION were seen smashing a window with a cinder block and flipping over a car in the WWE PC’s parking lot before running off into the night.