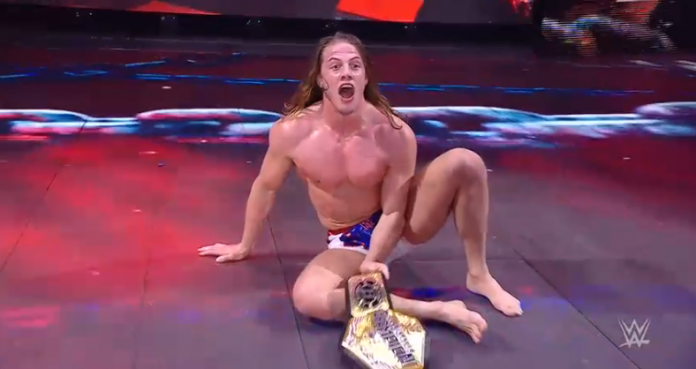 New WWE United States Champion Riddle says the title is going to elevate him to the next level, presumably the WWE Title chase. As noted, Riddle captured the title from Bobby Lashley by winning a Triple Threat at last night’s WWE Elimination Chamber pay-per-view, which also featured John Morrison. Riddle pinned Morrison to get the win.

In the video below, Riddle spoke to Sarah Schreiber after the show and referenced how the United States Title took Lashley to the next level, which may be a reference to Lashley attacking Drew McIntyre and causing him to lose the WWE Title. Schreiber asked Riddle how he feels after the title win.

“It feels so good,” Riddle said. “A couple weeks ago I was talking to MVP, he kind of turned down one of my ideas, said I was stupid, and I kind of said, ‘Awww,’ but tonight when I won that title, I was like, ‘Aaaooooaaahh,” and my dreams came true. I am the new Usa, not U.S.A., you can say U.S.A., but I like to say Usa, or maybe for bro, Usa-Brusa, it’s pretty sweet. But I’m the new Brusa United States Champion… A lot of people say, ‘Hey, I’m gonna elevate this title, I’m gonna elevate this championship,’ And I’m like, ‘Nuh uh, not me!’ This championship is going to elevate me, it’s going to give me the golden ticket to open up the doors I need to open to get to the next level, just like it got Bobby to the next level, it’s gonna get me to the next level and right now… Wooo! With a tear in my eye, this is one of the greatest nights of my life, I am the United States Champion and I’m going to be for a long, long time, bro.”

There is no word on what WWE has planned for Riddle, and if Lashley will get his title shot on the Road to WrestleMania 37. Keith Lee may also factor into the title chase as he was replaced by Morrison at Elimination Chamber due to injuries reported by WWE.