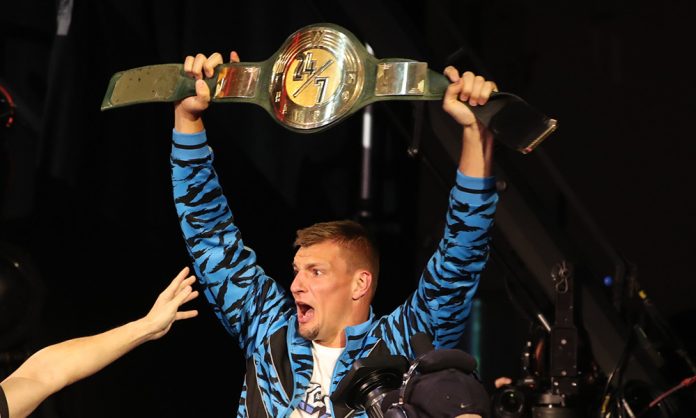 The NFL’s Tampa Bay Buccaneers posted an interesting video of retired tight-end Rob Gronkowski responding to a question about his current reign with the WWE 24/7 Title. It’s interesting that The Bucs acknowledged Gronk’s title reign as it’s believed that Gronk will not be able to do any pro wrestling in-ring work because of a clause that is included in all NFL player contracts, which says they are prohibited from participating in anything that could risk an injury. The Bucs tweeted the following video and captioned it with, “Mr. 24/7.”

“Yes, we need a lot of security,” Gronk said. “We need security everywhere, every tunnel, every entrance, everywhere in the stadium because I’m the 24/7 WWE title belt champion right now, of the world, and everyone’s coming for me. My friends are coming for me, and it’s special right now that I have it during this quarantine time because no one can find me, no one can get to me. So I’m the champ for a while, I am the champ right now, and everyone’s going to be coming for me. I got to have extra security but what’s crazy is that the security people… it’s the 24/7 belt, anyone an win it at any time. So, I better watch out. I got to watch my own back.”

WWE responded to the tweet and wrote, “Gotta keep your head on a swivel as #247Champion, @RobGronkowski! [eyes emoji] #247Title @Buccaneers”

As noted, Gronk still had 1 year and $10 million left on his contract with the New England Patriots. He is coming out of retirement after the Patriots worked out a trade deal with the Bucs ahead of Thursday’s NFL Draft. Gronk will be playing at Raymond James Stadium in Tampa Bay, which was to be the WrestleMania 36 location before the event was canceled because of the coronavirus pandemic. Gronk, who turns 31 in mid-May, recently inked a WWE contract to become a wrestler and it was believed that he’d wrestle his first big match at SummerSlam in August, from Boston where he has a strong history with the Pats. There’s still no word yet on how his NFL return will impact his WWE future. Gronk recently appeared on WWE SmackDown and then hosted Night One and Night Two of WrestleMania 36. Good friend Mojo Rawley spoiled his chance to win the WWE 24/7 Title during Night One, but Gronk then turned on Mojo during Night Two and won the title.

Stay tuned for updates on Gronk’s future. You can see the full Bucs Twitter video with WWE’s reply below:

Gotta keep your head on a swivel as #247Champion, @RobGronkowski! 👀 #247Title @Buccaneers https://t.co/xqHZAJXeSd