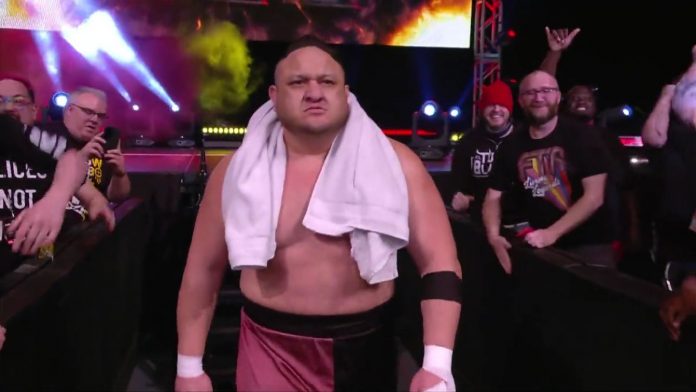 Ring of Honor held the Supercard Of Honor PPV event on Friday, April 1st 2022 at the Curtis Culwell Center in Garland, TX.

Jonathan Gresham defeated Bandido to become the undisputed ROH Champion. After the match, Jay Lethal and Sonjay Dutt attacked Gresham. In his return to ROH, Samoa Joe made the save and then shook Gresham’s hand.

WHAT A RETURN TO #ROH WE ARE WITNESSING RIGHT NOW! @SamoaJoe just arrived and business has picked up! What an incredible night it has been at #SupercardofHonor! pic.twitter.com/P5ssPlI333

It was announced that Joe will be appearing on next Wednesday’s AEW Dynamite. AEW President Tony Khan confirmed that Joe is #AllElite:

It’s official! @SamoaJoe is ALL ELITE! See you on Wednesday at #AEWDynamite! #SupercardOfHonor @AEW pic.twitter.com/n29KnFhCBP

Joe cut a promo after the PPV went off the air:

Samoa Joe’s post show speech after #SupercardOfHonor went off the air. Thanks and credit to @BodyslamNet’s @croftygurl23, who is there tonight, for the video. pic.twitter.com/bVV6oD60lw