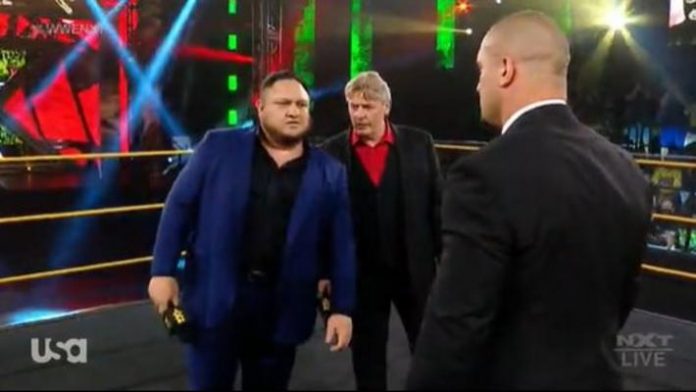 Samoa Joe has returned to WWE NXT. Tonight’s NXT episode opened up with NXT General Manager William Regal coming to the ring for a speech. Regal closed Sunday’s “Takeover: In Your House” event by saying the brand needs change. He got emotional as he talked about his time with the brand, and how he’s tried his best to deliver for the fans, wrestlers, announcers, and everyone else. Regal went on to say that he can no longer handle the job and it looked as if he was about to step down, but he was interrupted by NXT Champion Karrion Kross and Scarlett.

Kross ran Regal down in his face and taunted him, demanding that he admit Kross was right about Regal losing control of the brand. That’s when the music interrupted and out came Joe to a big return pop. Joe stared Kross down, and said Regal wanted to speak with him. Regal said he did, but later on, but since he’s here they can talk. Regal said NXT deserves a General Manager that can hold the position with the respect and integrity it deserves, so he wanted Joe to take the job over. Regal said he is no longer able to keep the job up. Joe responded with his answer – absolutely not.

Joe then talked about how Regal has transformed NXT into an international phenomenon, and he would leave big shoes to fill. Joe said while he can’t accept the job, he can offer to make sure Regal receives the respect he deserves from everyone else in NXT. Regal called that an interesting idea, and said there are two conditions – Joe can’t be a competitor, and he can’t lay hands on any NXT Superstars, unless he’s provoked. Joe ended up accepting the offer, and then had more words for Kross, who made his exit with Scarlett. Joe and Regal shook hands to end the segment.

It looks like Joe will be the enforcer to the General Manager with this new role.

We have no idea what to expect.#WWENXT General Manager @RealKingRegal addresses the NXT Universe right now on @USA_Network. pic.twitter.com/dzmaO7DEVy

"I want you to know that every spare moment of my time that wasn't spent with my family was spent making #WWENXT the place @TripleH and I wanted it to be." – @RealKingRegal #WeAreNXT pic.twitter.com/wdE8sqi4L5

"I don't think I am capable of giving you what you deserve anymore, and so I think it's time for me to…" – @RealKingRegal

"Joe, I want you to be the new General Manager of #WWENXT." – @RealKingRegal

"I can tell you without a shadow of a doubt, ABSOLUTELY NOT." – @SamoaJoe

SAMOA JOE IS BACK ON NXT. 😱