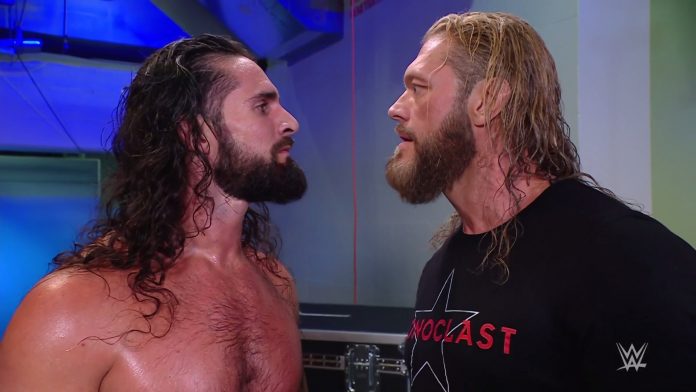 The first big tease between Seth Rollins and WWE Hall of Famer Edge took place during a backstage segment on last night’s SmackDown on FOX. Rollins had qualified for Money In the Bank and was backstage cutting a promo on how he should be the one to face WWE Universal Champion Roman Reigns at Money In the Bank. Edge, who is challenging Reigns at the pay-per-view, then confronted Rollins.

“See, I heard this droning, nasally whine, and I just wanted to see where it was coming from,” Edge said. “I see you haven’t changed since 2014. Yeah, I haven’t forgotten. See, here’s the fundamentally difference between you and I – you will bitch and moan, and whine and complain, about not getting a title shot, and I go out and take it. So now I’m going to go and do something you wouldn’t do, and that’s call Roman out.”

After last night’s showdown on SmackDown, Edge went to the ring and called Reigns out. The segment led to a brawl between the two while SmackDown Tag Team Champions The Mysterios returned to take out The Usos with steel chairs. Reigns then watched from the stage as Edge and The Mysterios triple teamed The Usos to close the show.

WWE has reportedly planned for Edge vs. Rollins to take place at SummerSlam for a few months now. It will be interesting to see how they get to that match in the next few weeks.