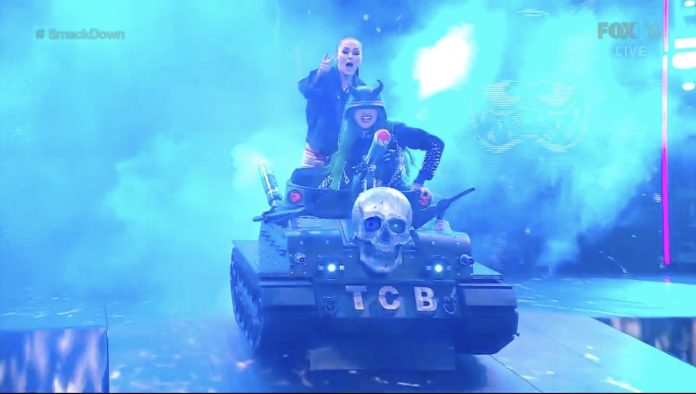 Nox and Shotzi are your new #1 contenders to the WWE Women’s Tag Team Titles. This week’s Money In the Bank go-home edition of SmackDown from Houston saw Nox and Shotzi win another non-title match over the champions Natalya and Tamina Snuka. This match was for a future title shot.

Last week’s SmackDown saw Nox and Shotzi debut with another non-title win over Natalya and Tamina.

As seen below, Megan Morant tried to interview Natalya and Tamina about Nox and Shotzi after the show, but they were not interested, instead focused on Money In the Bank. The champs are scheduled to compete in the Women’s Money In the Bank Ladder Match at Sunday’s MITB pay-per-view, along with Zelina Vega, Liv Morgan, Asuka, Naomi, Nikki Cross and Alexa Bliss.

There is no word yet on when Natalya and Tamina will defend the WWE Women’s Tag Team Titles against Nox and Shotzi, but we will keep you updated.