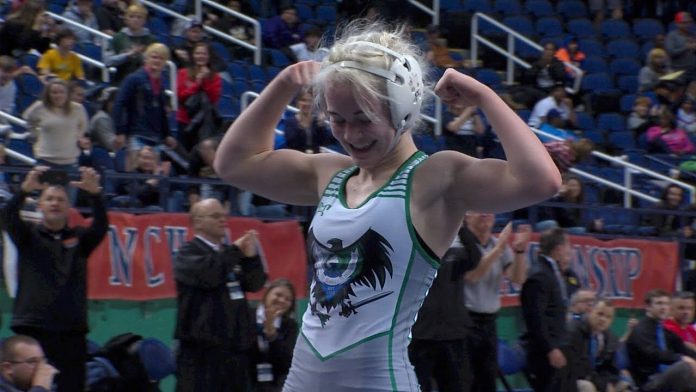 WWE has announced their new “HEAVEN” documentary to premiere on Sunday, March 7. For the first time ever, WWE Network Documentaries will go outside of the company to tell the story of Heaven Fitch, who in 2020 became the first female to win a high school boy’s wrestling state championship in North Carolina.

The documentary will be narrated by WWE Hall of Famer Beth Phoenix. WWE Chief Brand Officer Stephanie McMahon will provide the introduction to the film. “HEAVEN” will premiere, along with Women’s History Month, on Sunday, March 7 at 10am ET on the free version of the WWE Network and all WWE social channels

Here is the full announcement and trailer from WWE-

For the first time, WWE Network Documentaries will expand its award-winning storytelling beyond the world of sports-entertainment when it presents HEAVEN, a new documentary premiering Sunday, March 7.

HEAVEN tells the story of a trailblazing high school wrestler named Heaven Fitch. In 2020, as a junior, Fitch became the first female athlete to win a boy’s state wrestling championship in North Carolina, claiming the top spot in the 106-pound weight class. The film documents her inspiring journey up the ranks and the challenges she faced along the way, from proving doubters wrong to defying the odds and making history.

The trailer for HEAVEN, available to watch above, was first revealed by Sports Business Journal.

Don’t miss the world premiere of HEAVEN on March 7. The film will be available to stream on demand starting at 10 a.m. ET on the Free Version of WWE Network and across WWE social channels, including YouTube and Facebook.