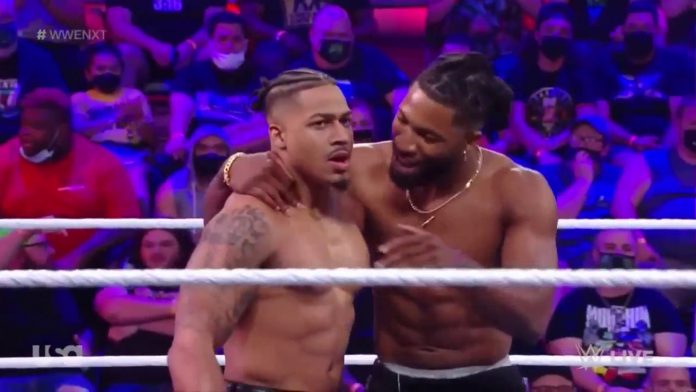 It looks like WWE NXT Breakout Tournament winner Carmelo Hayes may be going for the NXT Tag Team Titles, currently held by MSK.

Hayes revealed on tonight’s NXT 2.0 revamp episode that he is now partnered with Trick Williams.

Trick is the former Matrick Belton, a former college football/NFL player who worked the indies before WWE signed him with the February WWE Performance Center Class. Trick appeared on SmackDown earlier this year as one of Apollo Crews’ elite Nigerian guards.

Tonight’s NXT 2.0 episode saw Hayes and Trick talk about how they are “bout it, bout it” and there’s no reason to hold back any longer. Hayes talked about how his title shot guarantees a title around his waist, as Trick went on about how he was born with the gift of gab. Hayes declared that he is the golden child, and the chosen one, and that when he shoots, he doesn’t miss, and when he chooses to pass it, Duke will receive.

Hayes and Trick went to leave the ring but they stopped on the ramp to face off with Duke Hudson, who was coming out for a match. Hudson said Hayes got lucky in the Breakout Tournament, and then pushed his way to the ring. Trick told Hayes that this behavior is what he was talking about, and it ends tonight. Trick then rushed the ring and dropped Hudson with a cheap shot. Hayes joined him and they beat Hudson down before standing tall and making their exit.

Hayes tweeted after the segment and wrote, “Can’t be this good and be this humble.”

There’s still no word on when Hayes will cash in his Breakout title shot, or which champion he will challenge.

Can’t be this good and be this humble. https://t.co/1FkrIH5mla

Bout it bout it! https://t.co/Pcuo9XPkSR

When he shoots – he don't miss.@_trickwilliams is unleashing the real @Carmelo_WWE. Look out #WWENXT. pic.twitter.com/C00M7tZLe3