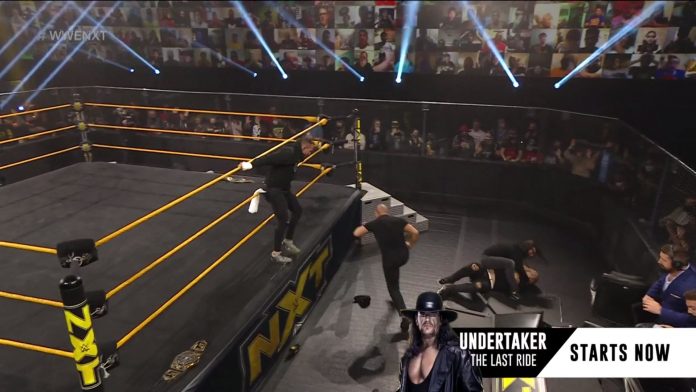 WWE NXT Champion Finn Balor and The Undisputed Era have returned to NXT.

Tonight’s show-closing segment on NXT saw Balor come out to the ring to address the crowd, making his first appearance since suffering a bad jaw injury at “Takeover: 31” in the win over Kyle O’Reilly on October 4. Balor noted that he now has three plates in his jaw that say he’s a bad son of a bitch. He went to continue the promo but was interrupted by The Kings of NXT – Pat McAfee, Pete Dunne, NXT Tag Team Champions Oney Lorcan and Danny Burch. McAfee bragged how The Kings have taken out The Undisputed Era, Breezango, Killian Dain, and Drake Maverick, and threatened to make Balor “dead” like all the others if he didn’t hand over the NXT Title to the group. Balor responded and said it’s easy for the mice to play while the cat is away, but now the cat is back and look what he just dragged in. That’s when the lights went out, “Shock the system!” began and out came The Undisputed Era – Adam Cole, Kyle O’Reilly, Bobby Fish, and Roderick Strong. The Undisputed Era rushed the ring as The Kings waited for a fight. The crowd went wild as Cole and McAfee went at it, Dunne and O’Reilly brawled, and the tag team champions battled Strong and Fish. NXT went off the air after Cole launched McAfee into the barrier at ringside, and then mounted him with lefts and rights.

It’s now believed that the men’s WarGames main event will feature The Kings vs. The Undisputed Era in eight-man action, but that has not been confirmed as of this writing. As noted earlier at this link, the NXT “Takeover: WarGames 2020” event has been officially announced for next month and there looks to be two WarGames matches.

There’s no word yet on if Balor has been cleared to wrestle as it looked like he stayed away from the brawl for the most part on tonight’s show. WWE never announced a timetable for his return from the jaw injury, but the usual recovery time is six weeks. Due to his jaw being broken in two places, his recovery time could be a bit longer, which could mean he has not been medically cleared.

Here are photos & videos from tonight-

The cat, @FinnBalor, is BACK… and LOOK who he dragged in with him.