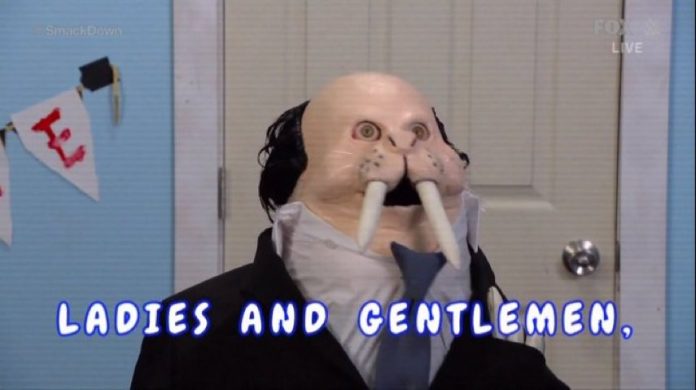 Bray Wyatt had been teasing the arrival of a “new friend” to the Funhouse this week. That friend looked to be a new puppet character called Persevering Parrot, who had overcome so much in his life to make it this far. However, Wyatt forgot to cut holes into the box that carried the parrot so it could breathe, and he apparently died before he could be revealed. That led to the McBossman puppet interrupting the segment. The puppet based on Vince McMahon’s “Mr. McMahon” character, which has been referred to as The Evil Boss in the past, ranted and yelled at Wyatt for losing the WWE Universal Title and for losing control of the Funhouse. He threatened to “fire!” Wyatt if he can’t keep the Funhouse together, and then introduced a new Special Advisor for the Funhouse to help run things – Wobbly Walrus. Wyatt wasn’t thrilled with the new addition, but the McBossman puppet said, “This is such good s***, pal!” The walrus puppet quickly introduced himself, and that was it for the segment.

It’s believed that the new Wobbly Walrus puppet is inspired by Paul Heyman, but that has not been confirmed. Chris Jericho called Heyman a walrus during a 2014 RAW episode and that led to “Walrus!” chants from the crowd. Others have referred to Heyman as a walrus over the years. We noted before that WWE filed to trademark the “Wobbly Walrus” name back on September 1, so it looks like this new character will be sticking around.

Below is video from the segment-