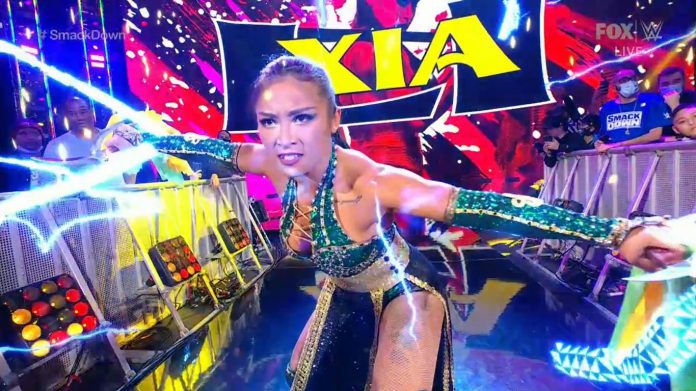 This week’s SmackDown on FOX featured a brief backstage promo from Li, who declared that she is only looking out for herself moving forward.

“My name is Xia Li,” she said. “I was The Protector, but I see no one worthy of my protection. Now I protect myself.”

You can see Li’s full promo below.

Li tweeted after the SmackDown segment and wrote, “I am the protector, I protect Myself.”

Li first started working with WWE in 2017 for the inaugural Mae Young Classic tournament, becoming the first Chinese woman to ever compete in a WWE ring. She worked WWE NXT, as a babyface and a heel, until being called up to the main roster in the 2021 WWE Draft back in October.

Li debuted as The Protector on the December 10 edition of SmackDown, helping current WWE Women’s Champion Naomi as she dealt with Natalya, Shayna Baszler and Sonya Deville. Li wouldn’t make her official main roster in-ring debut until the February 25 SmackDown, where she defeated Natalya after a few weeks of angles between the two. She has not worked a TV match since then, but she did defeat Shotzi in a pre-SmackDown dark match on March 11.

After being moved to SmackDown on the October 4 WWE Draft edition of RAW last year, Li worked a six-person dark match at the October 8 SmackDown, teaming with Tamina Snuka and Natalya for a loss to Tegan Nox, Shotzi and Aliyah. She then defeated Aliyah in a pre-SmackDown dark match on October 25. Li was out of the ring until defeating Shotzi at four non-televised WWE live events in December, and losing to Shotzi at one December live event. She then defeated Natalya at two non-televised WWE Supershow live events in January, and was out of the ring again until the February 25 SmackDown TV win over Natalya. Li then defeated Shotzi in the March 11 dark match, but has not wrestled since then.

There’s no word on what’s planned for Li, or if she will stick around on TV this time, but we will keep you updated. She did not wrestle a match at Friday’s SmackDown tapings from Albany, which will air next week as the WrestleMania Backlash go-home show, but it’s possible that another pre-recorded promo is inserted into the broadcast.

I am the protector, I protect Myself. https://t.co/81rb8KnUym