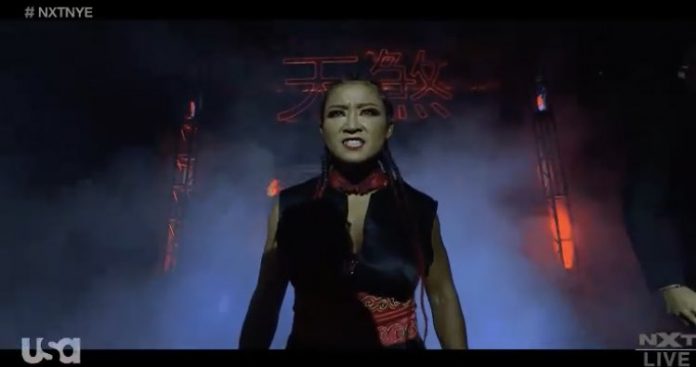 Tonight’s WWE NXT New Year’s Evil special saw Xia Li and Boa return from their mysterious transformations. Li and Boa came out with a new entrance and new looks. While the mystery woman accompanied them to the stage and watched from her chair, the male ShiFu master was nowhere to be seen and the mystery masked woman was not revealed.

Li and Boa stopped on the ramp during their new entrance to allow Li to put on a quick performance with a pair of sais. Li then hit the ring and faced off with Katrina Cortez for a fairly easy win. Li stopped at one point during the match and turned to the mystery woman, then bowed to her. Li ended up putting Cortez away with a kick for the pin to win. Boa and Li also returned to the mystery woman’s chair after the match and bowed to her.

Cortez is the former Catalina Garcia, and this is her new ring name. Her Twitter handle has changed to @KatrinaC_WWE. The 24 year old named Jessy from Chile signed with WWE in early 2019 and once appeared on RAW with Sin Cara for a brief run, using the name Carolina. She’s worked NXT live event matches since debuting in September 2019, and also worked some WWE Main Event tapings in 2020.

Li took to Twitter after New Year’s Evil and made several tweets, declaring that she and Boa are just getting started after their transformation. “This is just the BEGINNING,” she wrote.

Cortez, who worked her 2019 debut match as Jessy Diva Del Ring, took to Twitter after tonight’s loss and delivered a message on her new name. “Welcome with a bitter taste but time after time … remember that the Diva of the Ring was not born in a day. I am studying and also improving. Fighting, physically and mentally. KATRINA CORTEZ hell I love you [fire emoji],” she wrote.

This is just the BEGINNING . https://t.co/ZLJ7INLGQy

The transformation is complete.@XiaWWE is on a completely different level right now at #NXTNYE.#WWENXT pic.twitter.com/yv9p1ZdL9D