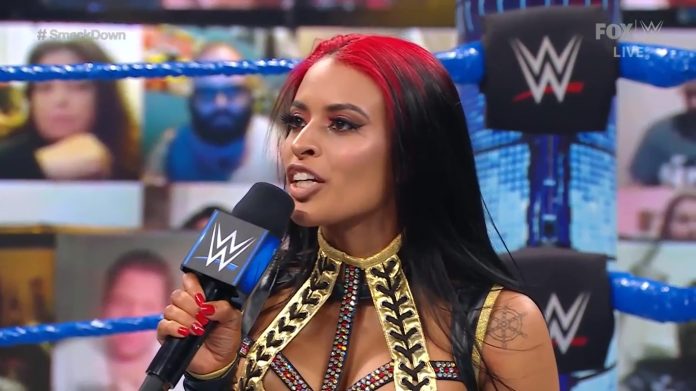 While Zelina Vega did not appear on last night’s WWE SmackDown, WWE did release a post-show backstage promo that she did. Vega made her WWE return last week and received a spot in the Women’s Money In the Bank Ladder Match spot, then lost to Liv Morgan in her return match. In the video below, WWE caught up with Vega and asked her if she has comments on her strategy for Money In the Bank.

“You realize who you’re talking to, right? The best manager in the business, future Hall of Famer for being the best manager in the business,” Vega declared. “What I’ve learned as a manager is that you do not reveal your strategy, especially before something like Money In the Bank. So while the girls are running around worrying who else is going to be in the match, who’s qualifying, I’m going to be home thinking about how I may not out-power them, and I may not out-quick everybody, but I definitely will out-smart each and every one of you. So, bring every ounce of air that you have, because that will be the last breath that you are going to take.”

Vega walked off, stopped and continued, “And you know what? Yeah, that was a powerful statement. But I’m a powerful woman.”

She then threw a stack of money into the camera and said, “See you at Money In the Bank.”

There’s no word on if Vega will be on next week’s Money In the Bank go-home edition of SmackDown from Houston. She joins Morgan, Asuka, Naomi, Alexa Bliss and Nikki Cross as confirmed entrants in the Women’s Money In the Bank Ladder Match. There are still two blue brand spots to be filled.

Vega re-tweeted her backstage promo and captioned it with, “Yeah, I make powerful statements. I’m a powerful woman. See you at @WWE #MoneyInTheBank [money emoji] #ThrowStacksAtEm”