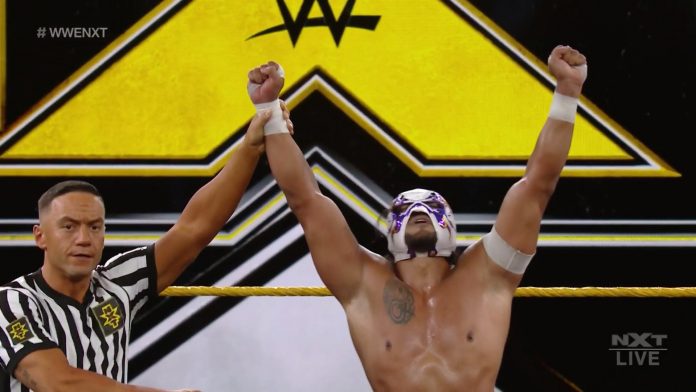 As reported before, this week’s WWE NXT episode saw the tournament to crown an Interim NXT Cruiserweight Champion continue with action from Group A and Group B. El Hijo del Fantasma made his official NXT TV debut and defeated Jack Gallagher to push his record to 1-0 in the round robin tournament.

WWE changed plans for Fantasma’s look and let him use a mask that is closer to what he used before signing with WWE. You can see the mask he is using in the match video above, and you can see the original mask they had him using for last week’s teaser promo at the end of this post.

As we’ve noted, original plans had Fantasma working in NXT without a mask but plans were changed. He made his in-ring debut back at NXT live events in February, teaming with Raul Mendoza, and he was not wearing the mask for those matches. Regarding the change in style of mask, it looks like the decision was made late last week when they started using the current mask in promotional graphics. WWE started using those graphics about two days after the promo aired that had Fantasma wearing the mask with a darker look.

In other Fantasma news from this week’s NXT episode on the USA Network, a segment aired where Fantasma fought off the masked kidnappers in the parking lot of the WWE Performance Center. After Fantasma’s tournament win, he was in the parking lot when a SUV drove up and stopped. The mystery men wearing lucha masks hopped out and tried to kidnap Fantasma, but he fought them off and they sped away. These are the same masked men who recently abducted Mendoza and Joaquin Wilde on NXT TV. You can see video from the segment below.

It’s interesting that Fantasma got involved with the abduction storyline this week as he was recently reported to be one of the men behind the kidnappings, as reported in early April. It was reported that the storyline is based on the Symbionese Liberation Army, a left-wing terrorist organization active in the United States in the early 1970s. They were known for committing various acts of violence, most famously the kidnapping of heiress Patty Hearst. The 19 year old daughter of a publishing magnate was kidnapped in 1974, but it was announced less than two weeks later that she had joined the SLA. Hearst stated later on that members of the group had threatened to kill her and sexually assaulted her, which led to them brainwashing and indoctrinating her. Her attorney used the Stockholm syndrome argument in court. The recent report on NXT creative plans noted that the NXT Superstars being kidnapped, and there would be others in the coming weeks, would begin to sympathize with their kidnappers, as Hearst did, and join them in a new NXT stable. That same report noted that Fantasma would be the main leader of the group, based off the SLA’s leader, Donald “General Field Marshal Cinque” DeFreeze. The plan then was for another NXT Superstar to be based off the other main SLA leader, William “General Teko” Harris.

There’s no word yet on if WWE still has plans for Fantasma to be behind the kidnappings, or if the stable is still based off the SLA, but it looks like Fantasma is still involved.

Stay tuned for updates on plans for Fantasma and the storyline with the abductions.