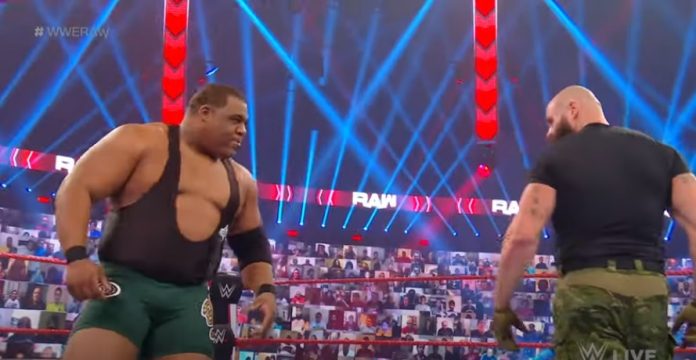 It looks like WWE is building to two big rematches coming out of this week’s RAW episode – Aleister Black vs. Kevin Owens, and Braun Strowman vs. Keith Lee.

This week’s RAW saw Kevin Owens host The KO Show and call out SmackDown Superstar Bray Wyatt, hoping to get revenge for The Fiend attacking him on last week’s SmackDown. While Wyatt responded from the Firefly Fun House on the big screen and warned Owens on behalf of The Fiend, Wyatt did not appear live in the ring on RAW this week. However, Black did attack Owens on the ramp and take him out with a Black Mass to continue their feud. Below is post-show video of Black revealing that he and Owens will go at it one more time on next week’s RAW. Black also cuts a promo on how Owens created who he is now, and said he wants to do barbaric things to Owens.

“You know, Kevin… three and a half years ago, I breathed life into Aleister Black, in this building actually, and isn’t it ironic that for the last four weeks we have been mourning his loss, because where that guy loved balance and believed that no man was ever truly good, no man was ever truly evil, this guy is a vile, angry, son of a bitch,” Black declared. “And all because you couldn’t say that you were sorry, Kevin. All that because you couldn’t be a decent human being. No, you had to project and blame the situation and blame others, and direct me to Seth Rollins, and then you fed me this line about your family. OK, Kevin. Like I said, I believed in balance once upon a time. I don’t know what I believe in anymore, Kevin. See, I’m kind of lost and I’m trying to find the answers, but every fiber of my being tells me I have to fight you. See, I feel like I’m this monster, a Frankenstein, that many people had a hand in, but most particularly you. You, Kevin, you for the most part, did this to me. Let’s be honest here, Kevin. This isn’t exactly healthy for me, nor for you, but I want to do barbaric things to you. I haven’t figured out quite what it is, but I know that next week, Monday Night RAW, we go at it one more time, and let’s just put a majestic button on it.”

This week’s RAW also feature an Exhibition Match between Keith Lee and SmackDown Superstar Braun Strowman. Strowman confronted WWE Producer Adam Pearce in the back and said he knows there is no RAW Underground again this week, but he didn’t drive to RAW for no reason. The Monster Among Men then threatened to destroy the locker room unless Pearce gave him a match. Pearce told Strowman that all he could give him was an Exhibition Match, since he’s not a RAW Superstar, and that the bout would not go towards any win-loss record. Strowman accepted the offer and Lee ended up telling Pearce to book him as the other competitor. The Exhibition Match between Lee and Strowman ended in a count out, but the post-match angle was done to continue the feud and set up a rematch. They ended up brawling to the stage and Lee launched Strowman into the LED boards. The segment ended after Lee charged again, sending he and Strowman off the stage to the floor. Officials tended to both Superstars and dealt with the chaos as RAW went to commercial.

Pearce took to Twitter after the show and proposed another match between the two big men. He wrote, “So @BraunStrowman and @RealKeithLee… run it back? Someday?”