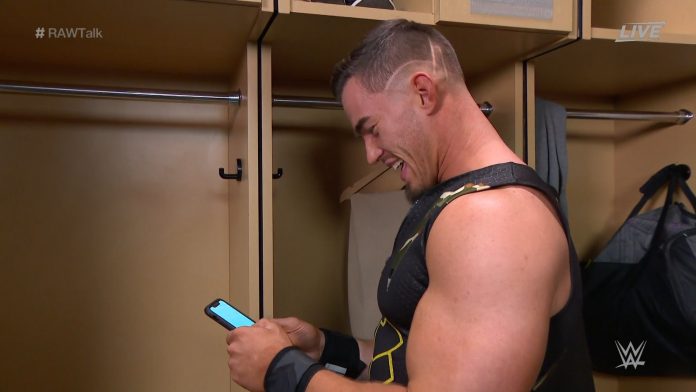 Austin Theory was once again featured in a WWE RAW angle with WWE Chairman & CEO Vince McMahon this week. As noted, Theory’s storyline with Mr. McMahon began two weeks back at the WWE Survivor Series as he was the one who stole Cleopatra’s $100 million golden egg from Vince’s desk, but this led to Vince granting him a match with WWE Champion Big E on the post-Survivor Series RAW, which Big E won. The storyline continued last week as Theory spent the three hours of RAW with Vince in his office, receiving advice and a slap across the face to end the night.

In an update, the McMahon – Theory storyline continued on this week’s RAW when Theory was called back into Vince’s office. Vince said he was thinking about putting Theory in a match on RAW, and while that didn’t happen, it looks like Theory will be feuding with Finn Balor now. A follow-up segment later aired with Theory doing jumping jacks in Vince’s office, when Vince told him that because he wasn’t ready earlier in the night when he saw him, there would be no match tonight. Vince said he was impressed with Theory’s match with Big E, but Theory needed to find another way to impress him this week since there would be no match. Theory tried to impress the WWE Chairman by showing off his abs while doing more jumping jacks, but that didn’t work. Vince told Theory to use his brains to find another way to impress him, and Theory then smiled before walking off. RAW then featured Balor vs. T-BAR in singles action. Balor finally got the win after T-BAR dominated most of the bout, but Theory attacked Balor from behind during his post-match celebration, and laid him out with the ATL. Theory then pulled out his phone and took a selfie in the middle of the ring as fans booed. You can see that selfie below.

Theory tweeted the selfie with a fallen Balor and tagged McMahon, asking if he was impressed.

As seen in the post-show video below, Theory was later interviewed by Kevin Patrick on RAW Talk. Theory commented that Balor was just in the right place at the right time, but then Patrick asked about his relationship with Mr. McMahon.

“None of your business,” Theory said when asked about his relationship with McMahon. “How about that? But you know what, I’m in a good mood tonight, I really am. I mean, who else hangs out with Mr. McMahon? Austin Theory. So, how about we do this, how about I give you the privilege to take a selfie with me? How’s that? Look, you’re speechless right now. I got it, I’ll take care of everything.”

Theory then prepared to take a selfie with Patrick, but acted like his phone battery was about to die. A disappointed Patrick walked off as Theory called him a loser, took a selfie on his own, and laughed about his battery being at 99%.

It remains to be seen where the McMahon – Theory storyline is headed after this week, but it looks like a Theory vs. Balor match will be happening soon.