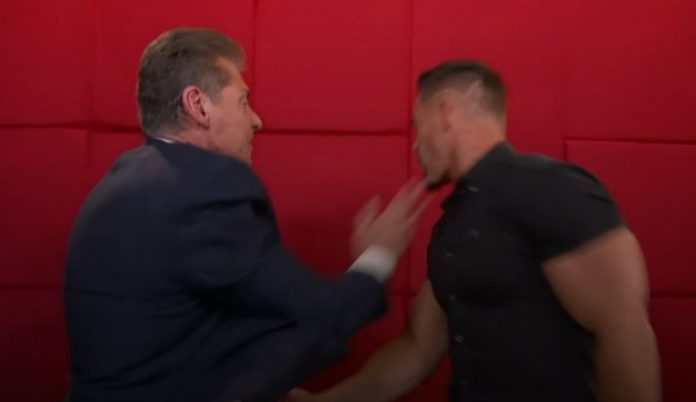 As noted, the new Vince McMahon/Austin Theory angle began on last week’s WWE RAW after Theory revealed he was the one who stole Cleopatra’s $100 million golden egg from Mr. McMahon’s desk, so that he could take a selfie with it at the WWE Survivor Series pay-per-view. Instead of punishing Theory, McMahon liked what he saw in the up & coming WWE Superstar, and booked him in a title match against WWE Champion Big E. That match headlined last week’s RAW and saw Big E retain.

In an update, there had been speculation on if Theory would continue to receive TV time from the golden egg storyline and that did happen on this week’s RAW. Early on in the show there was a segment where Theory entered McMahon’s office after being called in. Theory asked McMahon how he was doing, but McMahon ranted about how he hates it when people ask how he’s doing when they really don’t care. He mentioned how he has an earache and an ingrown toenail, that’s how he’s really doing, but he doesn’t like that kind of phony crap. McMahon then said what wasn’t phony was last week’s title match with Big E. McMahon then announced that Theory would spend the full 3 hours of RAW in his office, so that they could watch the show, be on the look out for any surprises, and to see if anyone expects the unexpected, and if they do, how they respond. Vince also threatened Theory, saying he will kill Theory if he ever steals from him again.

A later segment saw McMahon ask Theory what he thought about AJ Styles’ surprise, of trying to attack The Street Profits after pretending to be temporarily blind, which led to The Profits defeating Alpha Academy. Theory commented that the surprise was pretty good, but McMahon thought it was horrible because you could see it coming from a mile away. McMahon then advised Theory to be more attentive, and to look at the WWE Chairman when he’s speaking. The third segment saw McMahon ask Theory if Team Becky (RAW Women’s Champion Becky Lynch, WWE Women’s Tag Team Champions Carmella and Queen Zelina Vega, Tamina Snuka, Doudrop) expected what happened when they lost to Team Liv (Liv Morgan, WWE 24/7 Champion Dana Brooke, Bianca Belair, Rhea Ripley, Nikki A.S.H.). Theory said he didn’t think they expected the surprise, and Vince commented that you have to expect the unexpected. Vince went on talking about surprises, and how you can get screwed if a real surprise is coming your way, which Theory understood. The segment ended with McMahon snapping at Theory because he kept looking away, presumably at the door of the office.

The final McMahon – Theory segment of the night came before the main event. McMahon asked Theory if he’d enjoyed himself, and Theory said he’d had a great time in Vince’s office during the show. McMahon asked what Theory learned, and Theory said he’s learned to expect the unexpected, and be prepared for surprises. They both stood up to say goodbye and goodnight, but McMahon delivered a stiff slap to the face, knocking Theory back into his chair. McMahon also sat back down and remarked that Theory still has a lot to learn.

Theory has not commented on this week’s RAW segments with the WWE Chairman, but he did tweet a photo of the slap, captioning it with the “wrapped present” emoji. You can see that tweet below. There is no word on where the McMahon – Theory storyline is headed after this, or if it will continue on next week’s RAW.