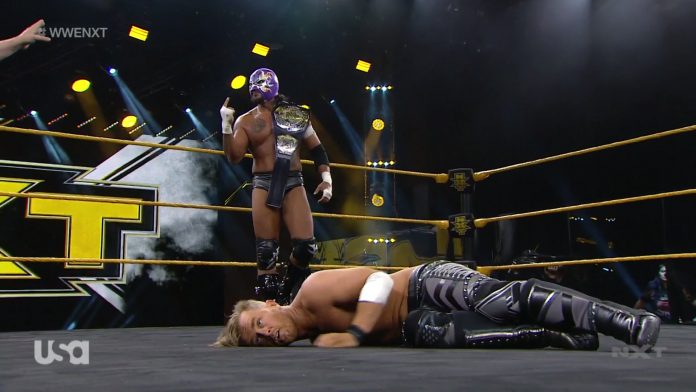 Tonight’s main event saw an appearance by the masked mystery men that have been involved with abducting NXT Superstars and confronting Fantasma in recent months. They faced off with Fantasma at ringside while he was down, but Maverick nailed a suicide dive to take them down. That led to Fantasma bringing Drake back into the ring and putting him away for the win. After the match, Drake received a show of respect and chant from the trainees sitting in the crowd as fans. This was to be his last WWE appearance after he was released back on April 15 as a part of the company-wide cuts brought on by COVID-19. WWE allowed Drake to work the tournament as it had announced already, but there were rumors this week of Drake re-signing with the company. Triple H met Drake on the stage as he waved goodbye, then shook his hand and offered him a NXT contract. Drake then signed the contract and raised it in the air as NXT went off the air on the USA Network.

This is Fantasma’s first title reign since debuting for NXT earlier this year. There’s no word yet on what will happen with Devlin, but he won the title back on January 25 at Worlds Collide, by defeating champion Angel Garza, Isaiah “Swerve” Scott and Travis Banks in a Fatal 4 Way. WWE recognizes his reign at 130 days. Devlin vs. Fantasma is expected to take place at a later date after Devlin is able to travel back to the United States.

Both @WWEMaverick and @hijodelfantasma REFUSE to quit in this high-stakes battle for the #WWENXT Cruiserweight Championship. pic.twitter.com/55W8FF7Lhz

Nothing to be ashamed of @WWEMaverick. You gave your all. #WWENXT pic.twitter.com/uA3Ab8zZym

#WWENXT is the land of opportunity.