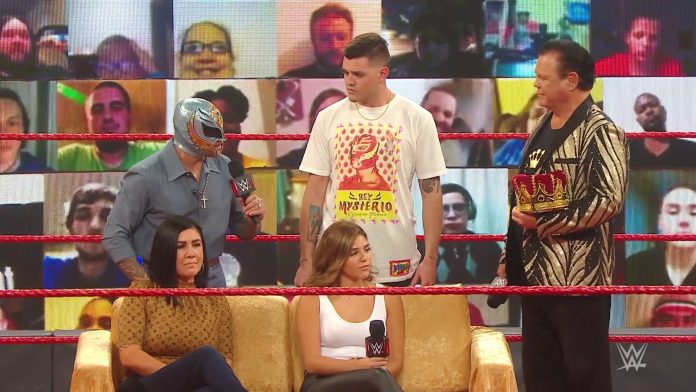 WWE continued the storyline as the Mysterio Family vs. Murphy and Seth Rollins feud progressed. Rollins was shown earlier in the night picking up Murphy’s phone that he left behind. WWE Hall of Famer Jerry Lawler hosted a “King’s Court” segment with Rey, wife Angie, daughter Aalyah, and son Dominik Mysterio, where Aalyah mentioned that Murphy came looking for her the previous week when he apologized for everything, not the other way around. Rollins interrupted that segment from the big screen and continued to taunt the family before revealing a text message conversation between Murphy and Aalyah, which he found while going through Murphy’s phone.

For those who missed it, the screenshot was of a conversation that took place on September 26. It went like this:

Murphy: Hey.
Murphy: I just wanted to apologize again…
Aalyah: Thank you.
Murphy: I hope you’re doing okay…
Aalyah: I’m fine. It’s just been a lot.
Murphy: I get it, but if you want to talk about it, I’m here.
Aalyah: I might just take you up on that offer… btw Happy Birthday!

Rollins taunted Aalyah by saying it seems she’s a little more friendlier than she was letting on. Aalyah ended up storming off to the back while her parents followed her. This led to tension between Murphy and Rollins backstage as Murphy grabbed Rollins, but Dominik ran backstage and attacked Murphy before he could strike Rollins.

WWE later announced Dominik vs. Murphy in singles action. They fought back & forth until Aalyah came down to stop her brother from attacking Murphy with a kendo stick. She begged Dominik to put the weapon down, while he ordered her to leave so he could handle the situation. Dominik ended up distracted by his sister, which allowed Murphy to roll him up with a handful of tights to win. The post-match angle saw Dominik attack Murphy with the stick, until Aalyah got in the way and begged him to stop. They argued some more before Dominik said their dad was right when he said Aalyah is naive. She ended the segment with a slap to Dominik’s face before storming back to the back.

As seen in the video below, Murphy appeared on RAW Talk with hosts Charly Caruso and WWE 24/7 Champion R-Truth after RAW went off the air. He was asked what’s going on.

“Listen, no comment,” Murphy said about Aalyah. “You see, what Seth did, he should not have done, and me and Seth were going to have words about that. You see, I follow everything Seth does, I follow the greater good. I’m all for the greater good, but what Seth did by taking my phone and showing the world private conversations, we’re going to have words. But me and Aalyah, no comment.”

Charly then asked if Murphy feels like his actions might signify loyalty or support for the Mysterio Family.

It was reported last week that WWE had plans for Aalyah to perform as an actress only, and not an in-ring talent. There’s no word yet on where they’re headed with the Mysterio Family vs. Rollins and Murphy feud, but there rumors of some sort of match at WWE Hell In a Cell on October 25.

Stay tuned for updates on the feud and Aalyah’s involvement. Below are photos & videos from tonight’s matches and segments at the Amway Center in Orlando:

If one thing's for sure, the Mysterio family has a united front that @WWERollins … is a FRAUD. #WWERaw pic.twitter.com/1CLnGRvbg5

"The truth is that Aalyah might not be telling the truth in regards to how she feels about my disciple, @WWE_Murphy." – @WWERollins