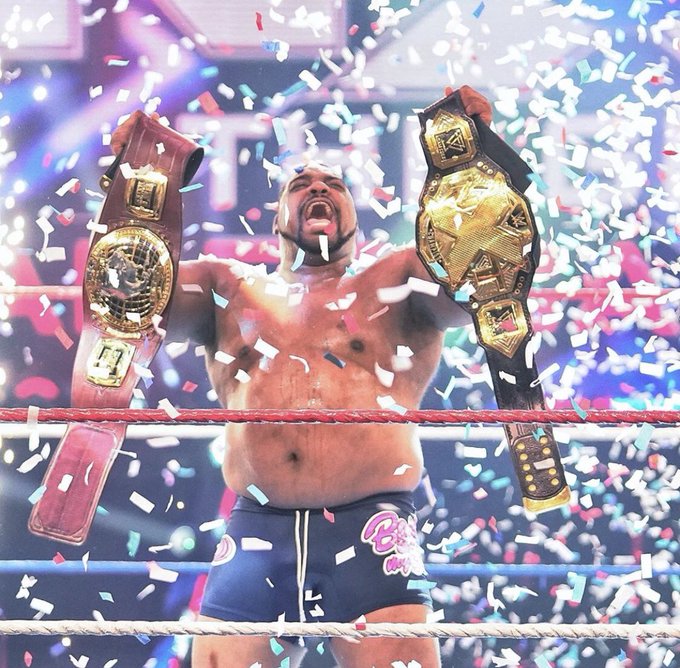 Above is video of McKenzie Mitchell talking to new WWE NXT Champion and NXT North American Champion Keith Lee after his historic win over Adam Cole in last night’s “Winner Takes All” main event of the Great American Bash Night 2 episode. Lee recalled comments made by WWE Hall of Famer Mark Henry and said the win was also for him. He also remembered his trainer, “Killer” Tim Brooks, who passed away on June 30. McKenzie began the interview by asking Lee if he was basking in his own glory.

“That was such an easy one,” Lee said. “I mean, I would love to say yes, but right now I’m in so much pain it’s hard to bask in anything, but the throbbing of my body, my face, my ankle… but you know, honestly, God, yeah. This is sweet in so many ways. From the journey to coming here and having such a slow start, stop-start situation. Take it all the way back to when I stood out there and I talked to those four guys, and I said, ‘Hey, I’m just trying to decide which championship I’m taking first.’ It’s weird, right? I go out and say that to them once, and now here I stand with one I took from them, and the latest addition. History, McKenzie. I’m feeling like a historian, I’m feeling historical. How else do you describe this, except for magic? I believe Mark Henry said to me that I would bring back… forgive me if I misquote him, but I’m fairly certain I was paying attention when he said I would bring back ‘big man magic.’ Mr. Henry, this one’s for you, too. But more importantly, McKenzie, my coach who just passed away, just last week, once told me I would be the top, I would be one of the best this industry has ever seen. Today, he’s a prophet, and for me it doesn’t get sweeter than that.”

WWE also released post-show footage of Cole, which you can see below. McKenzie mentioned Cole is the longest-reigning NXT Champion in history as his reign went for 403 days. She asked him how he feels after the title loss but the leader of The Undisputed Era had nothing to say.