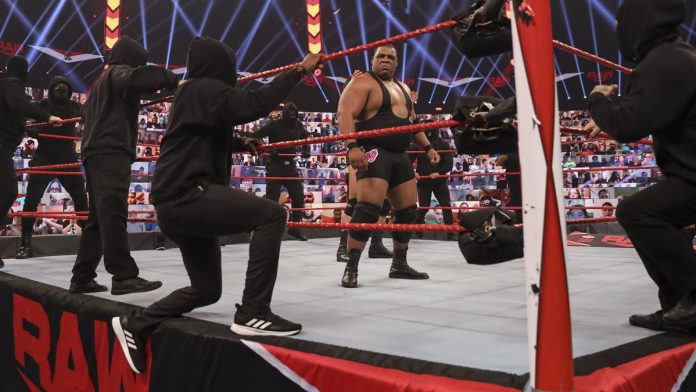 RETRIBUTION attacked top WWE Superstars once again on this week’s RAW. RETRIBUTION’s night on RAW started when they interrupted The Hurt Business’ in-ring celebration following Cedric Alexander’s win over Ricochet. They cut the lights and the virtual ThunderDome fans in the Amway Center, and then had their logo displayed around the arena. A smaller group of masked male and female Superstars then appeared on the big screen. It’s believed that these 5 wrestlers were Dominik Dijakovic, Dio Maddin, Mia Yim, Mercedes Martinez, and Shane Thorne. Other names rumored to be in the spot Thorne was in are Mojo Rawley and The Miz. It’s believed that Martinez spoke first.

“Listen up,” the first person said. “To you and all the other so-called Superstars. We are the product of empty promises, the results of empty lies, greed and betrayal. We once trusted but now we walk with eyes wide open.”

The second person, believed to be Dijakovic, then spoke and mentioned how the group is preparing to reveal exactly who they are.

“We see what you are,” the man said. “Waste, scrap, byproduct. When you show loyalty to an entity that casts people aside like garbage, you become garbage. When you sell your soul to a corrupt machine, you become corrupt. Like you, we once believed that our time at a Performance Center would lead us to fame and wealth. Unlike you, we refuse to suck up to an entitled regime. So while you enjoy your last days of oblivion, we prepare to show you exactly who we are, while we gut your reality. We are RETRIBUTION!”

An interesting item coming out of the promo is how they referenced time spent at “a Performance Center,” which could be the same WWE Performance Center. After the interruption, The Hurt Business confronted WWE Producer Adam Pearce backstage and offered to replace his security, to keep everyone safe from RETRIBUTION. Pearce agreed. RETRIBUTION later caused the lights to flicker during the Aleister Black vs. Kevin Owens match, which helped Owens take advantage and hit the Stunner for the pin.

This week’s biggest RETRIBUTION angle came during the non-title main event between Keith Lee and WWE Champion Drew McIntyre. Per the stipulation, Lee would get to challenge McIntyre for the title at WWE Clash of Champions if he won, and if Randy Orton can’t get medically cleared before September 27. The stipulation is still up in the air as the match ended in a No Contest. The Lee vs. McIntyre match was going on when RETRIBUTION suddenly surrounded the ring and jumped up on the apron. Earlier in the night there were just 5 members, but now there were a dozen or more masked men and women. They hit the ring and beat Lee and McIntyre down as the crowd booed them. The Hurt Business – MVP, Shelton Benjamin, Cedric Alexander and WWE United States Champion Bobby Lashley – finally made the save and brawled with RETRIBUTION at the bottom of the ramp. Lee and McIntyre recovered in the ring, and hit a big double dive over the top rope, taking out The Hurt Business and RETRIBUTION on the floor. This week’s “In Your Face” edition of RAW went off the air with Lee and McIntyre exchanging looks while standing tall over RETRIBUTION and The Hurt Business. There’s no word yet on when WWE plans to reveal the RETRIBUTION members, but tonight’s promos indicate that they are getting closer. As we’ve noted, it’s been reported that the wrestlers used each week for the RETRIBUTION segments on RAW will not necessarily be an actual member of the group when the characters are revealed. However, it’s believed that Dijakovic and some of the other regulars will be members of the stable.