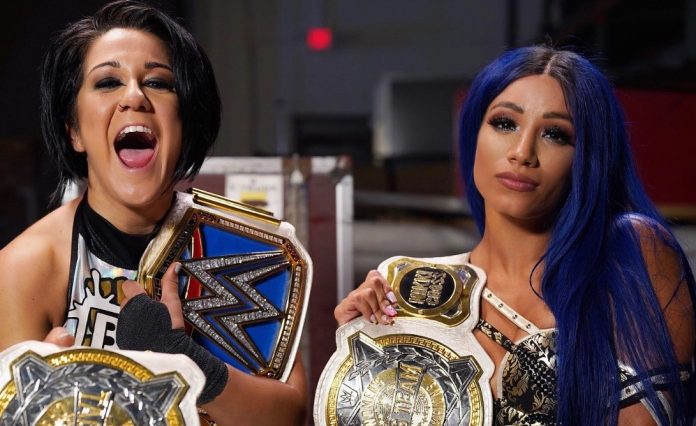 This week’s WWE NXT main event saw Tegan Nox and Shotzi Blackheart unsuccessfully challenge the WWE Women’s Tag Team Champions – Sasha Banks and SmackDown Women’s Champion Bayley. After the match, Banks and Bayley celebrated until they were attacked out of nowhere by NXT Women’s Champion Io Shirai. Shirai cleared the ring of Bayley and Banks, sending a message that NXT is hers. This was Shirai’s first live appearance since winning the title by defeating Rhea Ripley and former champion Charlotte Flair in the “Takeover: In Your House” main event a few weeks back.

Triple H took to Twitter after the show and thanked Banks and Bayley.

“No matter how far you go or how successful you become, you can always come home. Thank you @SashaBanksWWE and @itsBayleyWWE for bringing your shine to @WWENXT. #WeAreNXT #Proud,” he wrote, attaching two backstage photos to the tweet.

There’s no word on if WWE has plans for a match between Shirai and Banks or Bayley, but Shirai tweeted a warning to the two after the show. “This is my house. This is my NXT,” she wrote. She added in another tweet, “This is my NXT!!!!!!!!!”

Bayley and Banks have not commented on the segment as of this writing. You can see Shirai and Triple H’s full tweets below, along with several shots from the main event and post-match angle:

No matter how far you go or how successful you become, you can always come home.
Thank you @SashaBanksWWE and @itsBayleyWWE for bringing your shine to @WWENXT. #WeAreNXT #Proud pic.twitter.com/ZfEJSoiZuQ

This is my house。
This is my NXT。
https://t.co/FX53BudnRk