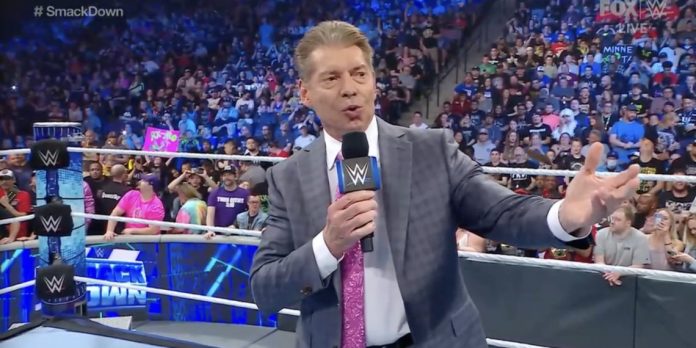 Mr. McMahon appeared on WWE television once again this week.

Following his rare WWE TV appearance on Friday Night SmackDown last week, the former WWE Chairman and CEO once again appeared in the ring on WWE TV on Monday night.

At the WWE Monday Night Raw show from the Pinnacle Bank Arena in Lincoln, Nebraska, Mr. McMahon appeared in an in-ring segment to promote the WWE television return of John Cena.

McMahon noted on the 1,517th edition of Monday Night Raw — the longest episodic television show in history — that Cena, whom he referred to as the “greatest WWE Superstar of all-time” — will be returning to the program on next week’s show in Laredo, Texas.

“WWE Raw has been on the air for almost 30 years,” McMahon stated during his in-ring promo segment on the 6/20 episode of WWE Raw. “20 of those years have been dominated by the greatest WWE Superstar of all time. And that man makes his return to WWE Raw next week … John Cena!”

Check out video clips of Vince McMahon’s appearance on this week’s edition of WWE Monday Night Raw via the tweets embedded below courtesy of the official WWE Twitter feed.

Also embedded below is the official promotional graphic that aired throughout the show this week to hype John Cena’s return on next week’s show in Laredo, TX.

"#WWERaw has been on the air for almost 30 years. 20 of those years have been dominated by the greatest @WWE Superstar of all time. And that man makes his return to #WWERaw next week … @JohnCena!" – Mr. McMahon pic.twitter.com/XURzJ7z18j