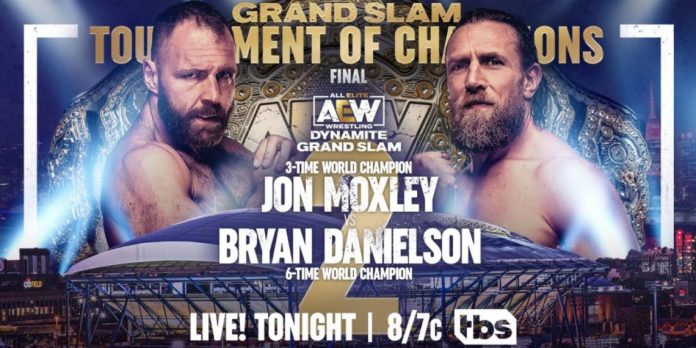 All Elite Wrestling Grand Slam, the event held at Arthur Ashe stadium is in the books and very similar to the show last year, Grand Slam appeared to be a pivotal night for the organization going forward. In some ways, it was a new chapter for the company after all the turmoil and publicity of the now-infamous All Out media scrum. How the results of Grand Slam continue to unfold remain to be seen.

The show opened with Claudio vs. Chris Jericho for the Ring Of Honor world title. It was a very solid contest, and underscored the longevity of Jericho, as he went step-for-step with Claudio throughout the bout. A cheap shot allowed Jericho to win the belt, which I’m guessing was a decision strictly made to attempt to secure a television deal for ROH. Tony Khan did a recent interview with Barstool and mentioned that he discussed a potential ROH deal with Turner executives. I have to say, I think the entire philosophy is flawed. I know I’ve said it before, but it will continue to be relevant as long as the status of ROH is up in the air. While the history of Ring Of Honor was very influential and AEW probably wouldn’t exist without it, the bottom line is, ROH was a brand that lost all of its momentum after The Elite left to launch AEW. The company was sold because it couldn’t draw enough to sustain itself in the crowded wrestling landscape. If there was money to be made with the current ROH brand then it wouldn’t have been sold in the first place. In my opinion, the most valuable asset and rightfully worth the purchase is the extensive video library. In an age where there’s big money in streaming networks, the purchase gives Tony Khan the foundation of a platform. There are hundreds of full-length events and television episodes in the archives that feature many of the stars that either Khan has under contract or are major stars in the WWE,. The ability to monetize that footage could be a major revenue stream. Other than that, the attempt to involve ROH on AEW programming only dilutes the All Elite brand. There are so many belts that it’s comical. Again, the ROH product couldn’t sustain itself and it was sold so it goes without saying that the resources of Tony Khan should be behind All Elite because that’s the brand that has the best chance to be competitive in the industry. Using the time, energy, and resources for ROH takes away from building AEW.

As far as getting Ring Of Honor back on television, Tony Khan needs to focus on booking Dynamite to be the best show possible on a weekly basis, and again, other projects will inherently take away from that. Plus, you have to ask, do fans really want to watch another hour of wrestling every week? The numbers for Rampage suggest that there isn’t the demand an extra hour of programming. Jericho winning the ROH title is a neat Easter egg, but in some ways, it’s similar to when the Dudleys won the WCW tag belts after the WWF purchase, there will probably be an asterisk to it because fans know that Jericho wouldn’t have worked for the original ROH.

The Women’s title match was fine and Toni Storm retained. The whole Thunder Rosa story is bizarre because there are conflicting reports about if she’s legitimately injured or was sent home because she was difficult to work with. In many cases, you have to take internet speculation with a grain of salt, but just for the sake of discussion, if Rosa was difficult to deal with to the point that she had to take time off then it’s best for Tony Khan to release her. Don’t get me wrong, Thunder Rosa is very talented, but if the CM Punk debacle taught Tony anything, it should be that you have to put the company ahead of any individual star.

Saraya, the former Paige, made her surprise AEW debut and it generated an incredible response from the crowd. All things considered, this is great for the 30-year-old athlete that thought her career was over from a serious neck injury. Paige went through a lot of turbulence personally with the injuries, substance issues, and other problems so it’s wonderful to see her happy and healthy now. Assuming she’s medically cleared, this is a great addition for the women’s division since Saraya immediately became the biggest star in the division.

The All-Atlantic title match was good, and the athleticism was incredible. That said, the title is nothing more than a prop so there wasn’t the prestige of a championship bout. The great Jim Valley, the king of recovery, summarized the Orange Cassidy situation perfectly on social media. Cassidy is very popular, but his gimmick doesn’t lend itself to competing with the top stars so he has a lot of defeats on his record. You can only book him to lose so many times before it diminishes his popularity so there’s definitely a booking predicament with him, and I’m not sure what the answer is for how to properly book the character.

The Acclaimed are a textbook example of what AEW should build around, wrestlers that get over organically with the audience. Swerve and Keith Lee are very talented, but were basically a throw together team. As I said when Swerve was originally signed, he can go in the ring, but he doesn’t bring anything to the table that isn’t already on the roster. Keith Lee is a unique athlete, but his weight fluctuates and it seems to effect his work. The Acclaimed are over and that draws money so it was the right decision to book the title switch.

The main event was very good and it was an example of the high quality pro wrestling that AEW can bring to the table. That said, despite being one of the biggest stars in the company, Jon Moxley should only be a transitional champion right now. He won the substitute version of the world title and then lost to CM Punk so he doesn’t really have the momentum of the world champion behind him at this point. While it might be obvious, sometimes the simplest answer is the right answer. MJF should be the next AEW champion, but I’m not sure how they will handle his character after that because he was getting a baby face reaction from the crowd so it will be interesting to see if Tony Khan will try to keep him heel after he wins the championship.