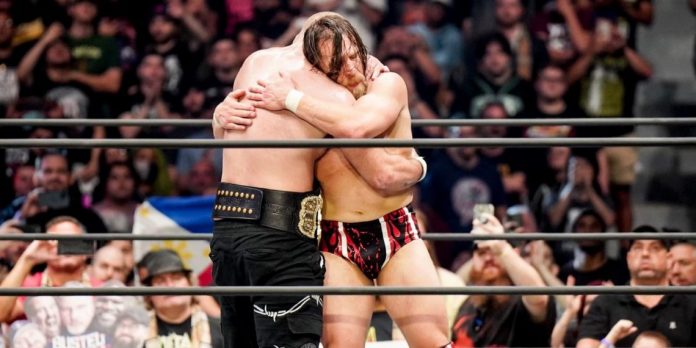 Moxley posed on the ropes after the match and looked up at MJF, who was watching from his luxury box with his Casino Battle Royale poker chip, which guarantees him a future title shot. MJF returned Moxley’s dead stare, while BCC president William Regal joined Danielson and Moxley in the ring from the announce table. Danielson was asking Regal if he had passed out in Moxley’s rear naked choke for the finish. Regal attempted to wrap the strap around Moxley’s waist, but Danielson yanked it away as Dynamite ended on TBS.

After Dynamite ended, Danielson wrapped the title around Moxley’s waist. Moxley and Danielson then exchanged handshakes and embraced in the middle of the ring before Danielson exited, limping up the ramp.

Moxley continued his celebration and exited, but paused on the ramp to take the microphone and address the crowd. He made it clear that the AEW World Title does not define him and that he believes AEW is the best pro wrestling promotion.

“…You have no idea how good you guys were tonight,” Moxley told the NYC crowd. “Let me tell you this, I am now once again the AEW World Champion, and it is among one of the best things that I will ever do, but it is not even near the top of the list. This championship doesn’t define me! Being a good man, being a good father, being the kind of man people can look up to… that is what defines me. But when it comes down to the best wrestling promotion on the planet… blood, swear, tears, passion. …This belt doesn’t define me, but I define this belt!”

As PWMania.com previously reported, Moxley was supposed to take 6 weeks off after the AEW All Out pay-per-view earlier this month, but AEW President Tony Khan needed him and Chris Jericho to step up while top stars were suspended for the All Out backstage fight, which pitted CM Punk and Producer Ace Steel against AEW Executive Vice Presidents Kenny Omega and The Young Bucks. Moxley’s friend recently expressed his displeasure and dissatisfaction with having to return to work so soon.

With his victory at Grand Slam this week, Moxley became the first-ever three-time AEW World Champion. Click here for spoilers on his first major title defense, which will take place on a special Tuesday Night Dynamite, and click here for full spoilers from Wednesday night’s Grand Slam tapings of AEW Rampage.

Here are photos and videos from the end of Dynamite, along with match footage from AEW:

After Dynamite Grand Slam goes off the air, Jon Moxley cuts a promo on what defines him and calls AEW the greatest promotion in the world. pic.twitter.com/x3hC3pS9iT

after #AEWDynamite went off of air @JonMoxley pic.twitter.com/6Fmchx9HqW