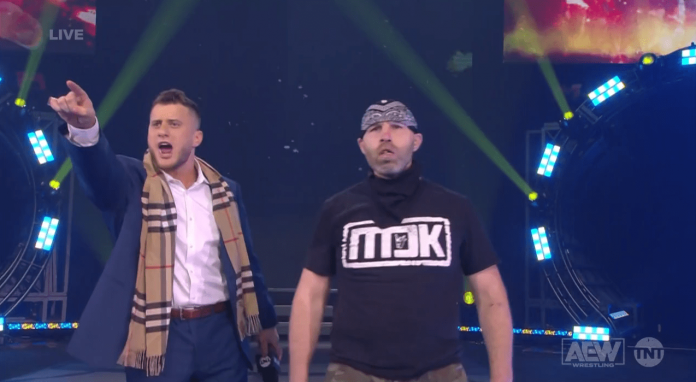 In the article I penned about Bryan Danielson’s rumored arrival to All Elite Wrestling, I mentioned that it’s often said that professional wrestling is about the moments, something that I’ve discussed often in recent months about AEW. As their viewership steadily increases, which is way better than a big increase and than a decrease in numbers since moderate growth leads to a more solid core audience, AEW isn’t perfect, but nobody should expect it to be. The Khan-owned organization has its critics and some of them have valid points about the upstart promotion, but at the same time, there’s no doubt about spark the group provided for the industry.

Aside from the major investment the company made in its video game division, the actual wrestling side of All Elite is profitable based on the extension of the TV deal, including the addition of the Rampage show that will start next month on Fridays. The fact that a pro wrestling group found a way to be profitable outside of the WWE is already a measure of success, particularly because profitability is the only factor that counts from a business perspective.

The main reason that AEW has garnered itself a portion of the market is that it provides a true alternative to WWE. Quite simply, All Elite is willing to do things that you just aren’t going to see on WWE television. That’s not to say that Khan’s decisions are always right or that the AEW philosophy will continue to trend in the right direction, but rather to point out that viewers won’t get WWE light from Dynamite.

Last week, during the Shawn Spears/Chris Jericho segment, it was announced that Nick Gage, former death match champion, convicted bank robber, and the subject of an episode of Dark Side of The Ring, will compete against Jericho in a match to further the storyline with MJF, leading to their eventual pay-per-view match. Obviously, there’s a certain level of a shock value, considering that there’s not really any portion of Gage’s career that is suitable for television, but that’s also the intrigue of the scenario. Most of the time, the McMahon product takes the paint-by-numbers approach and it leads to an often repetitive product. That being said, the company is will generate record-setting profits for the next few years so again from a business perspective, any criticism of the WWE brand is moot. On the flip side, if you want people to tune in on a weekly basis, a program has to give them a reason to watch to build an audience. Granted, there are some rightful critics to the Gage appearance, but at the very least, you have to wonder, “WHAT IN THE WIDE WORLD OF SPORTS IS GOING TO HAPPEN WHEN NICK GAGE HAS A MATCH AGAINST JERICHO?!”

Gage, who spent several years in prison for the prior bank robbery, legitimately almost died during a death match tournament about a decade ago. A death match wrestler that has a reputation as a wild performer in a match against the biggest main stream star in the company is “must watch” TV because it’s such a styles clash that fans want to see what happens in the match. Is Jericho going to get sliced with a pizza cutter? Are things going to go off the rails on live television?

Those that claim that Gage isn’t well-known enough to be used on national TV are probably misguided based on his style. The episode of Dark Side of The Ring gave him more exposure, the mishap during the David Arquette match was discussed on the Joe Rogan podcast, and his run in Game Changer Wrestling, a very popular group among independent wrestling fans, made him a guest on a myriad of podcasts. Plus, he had a match last weekend against Matt Cordona, where the former Zack Ryder shocked the wrestling world when he won the GCW title. I’m assuming Cordona’s title win was to allow Jericho to get the victory on tomorrow’s edition of Dynamite to progress the angle to MJF’s next challenger. This way Gage can lose a match without doing the job as the GCW champion, but more importantly, it was also major exposure for both GCW and Gage. The former Zack Ryder, despite being misused for the vast majority of his WWE tenure, remains very popular on social media and has over two million Twitter followers.

As you can see in this footage sent to us by @ClaytonComedy, the #GCWHomecoming crowd was NOT happy about Cardona’s title win pic.twitter.com/1dWAt3p00m


As far as why Nick Gage has such a diehard following, albeit to a niche audience, is ironically the same reason other performers have a dedicated fan base. There’s a level of authenticity to Gage that can’t be manufactured of scripted. Gage often said in promos that professional wrestling and performing in front of the fans are all that he has, and sadly, the Dark Side of The Ring episode explored the details of his family members that passed away. Gage has a believability, both for his in-ring persona and when he says that he will give it 100% when he performs for an audience.

Some will write Nick Gage off as an addict and a felon. The other side of the coin is as unconventional as he is as a professional wrestler, the tale of Gage is actually a redemption story. Gage could’ve died from addiction and became another statistic, but instead he cleaned his life up. He went from being a convicted bank robber and turned his life around to make his debut on national television. That is quite a comeback story, even if Nick Gage isn’t marketable to the causal WWE fans. Vice TV explained it in the documentary series, professional wrestling is all that Gage has, and he’s using it as something positive so he should get credit for the progress he made his life. Besides the Jericho bout, I’m not sure what else Gage could do in AEW, partially because of his style, but also that there are too many wrestlers already on the roster. That said, it would make sense if AEW booked a Moxley-Gage match, but it will probably still be a one-off appearance for the company.