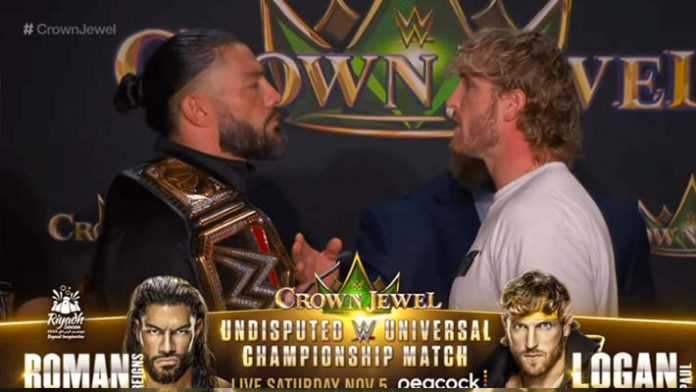 During a press conference last weekend, it was announced that Youtube and social media star, Logan Paul, who worked a few matches in the WWE previously, will challenge Roman Reigns for the Universal championship on November 5th in Saudi Arabia. We’ve already discussed previously that yes, the Saudi shows are for the blood money, and yes, the WWE is more than willing to be a part of the Saudi government’s propaganda campaign to attempt to steer the country’s image away from its political and social injustices. Despite what you might hear at the press conferences or the next shareholder meeting, the deal with the Saudis is about the cash, not social progress in the country. As such, the government has offered to invest a few billion dollars into a variety of sports and entertainment acts. The WWE, pro golfers, boxers, and music acts are offered more money to go to Saudi Arabia than any promoter in the United States could realistically offer because the funding is through the country’s oil industry. These WWE Saudi shows are the most profitable venture of the year for the company, guaranteeing the organization even more money than Wrestlemania. Tiger Woods was reportedly offered somewhere in the neighborhood of $700-800 million to attempt to get him to sign onto the LIV league.

It’s a harsh reality, but cash is king. In the business world, money is the top priority.

Still, while the Saudis get the star power and main stream act they want for the next propaganda project, the decision to book Logan Paul against Reigns speaks volumes about a few different aspects of the company.

As mentioned, from strictly a business perspective, Crown Jewel is already a success because the Saudi government is getting what they paid for so it keeps that business agreement strong, and of course, WWE will have its most profitable show of the year in November.

In a vacuum, the Saudi show is a win-win for everyone. However, outside of that, it’s a microcosm of WWE’s bigger problems. Regardless of if it was the 50/50 booking, the Vince McMahon philosophy, or any other reason, the WWE spent the past several years boosting its major shows with nostalgia acts from the past. When this year’s Wrestlemania needed a main event for night one, Steve Austin was called out of retirement for the first time in 19 years. John Cena is still the last main stream star the company made and that was over 15 years ago. Taking nothing away from Roman, he’s doing the best work of his career and he’s the top star of the WWE, but his name isn’t well-known among the general public. People that don’t watch wrestling know the name John Cena, but wouldn’t automatically know the name Roman Reigns. The type of star power the Saudis pay massive cash for goes beyond WWE because they ultimately aren’t paying for a WWE show, they are going for main stream publicity more than anything else.

As far as nostalgia, the WWE as a whole used the star power of the past as a substitute for a compelling product. Goldberg, Sting, Steve Austin, The Undertaker, and others were given the chance to shine again because it’s much easier to recycle a formula you know works than to risk anything with a new star. The problem is that, by nature, nostalgia is a limited concept, and that’s exactly what happened to these Saudi shows. The government got Goldberg, Undertaker, Brock Lesnar, Triple H, and Shawn Micheals, Essentially, the WWE ran out of main stream acts and the current roster doesn’t have anyone to compare to that level of star power. Again, 50/50 booking or any other reason doesn’t matter, the bottom line is, WWE management doesn’t have the ace up their sleeve to cash-in on the most profitable show of the year.

So, the office booked Logan Paul against Roman Reigns because for whatever reason, Logan Paul is more well known to the general public than the rest of the current WWE roster. Granted, I’m only a few years older than Logan Paul, and maybe I’m just an old soul, but I will never understand those that are “famous for being famous.” I don’t care if Logan Paul went to get a coffee or got hit by lightning. The Kardashians are one of the reasons for the downfall of society. Still, the government is paying for main stream publicity and Paul brings that to the table. However, it underscores the fact that there aren’t any legitimate main stream stars on the current roster. When a guy with two matches is a bigger deal to an outside entity than anyone that is on the show weekly, there’s definitely a problem. Sure, the WWE draw draws and will make the most money in the history of the company in the next few years because of the television deals, but similar to when the company ran out of part-timers for Saudi Arabia, how are they going land a similar TV deal next time when it’s clear that the majority of the company aren’t viewed as major stars by the general public?

As far as the actual match, unless Roman Reigns destroys Paul within two minutes, what does that say about the rest of the roster? Reigns steamrolled everyone so what does it says about all the top names he beat if Logan Paul has a competitive match with him? If the guy with only two matches can be competitive with the world champion, how difficult is the sport supposed to be? If it’s implied that anyone can get in the ring, doesn’t that further dilute the star power of the current roster?

The argument could be made that with the type of money the Saudis show bring in that any criticism is moot, and depending on your perspective, that might be true, but at some point those decisions could eventually hinder the rest of the product. For example, when will the company truly made its next generation of major stars? It goes without saying that the talent is there, but perception is reality and the Saudis didn’t think there were any main stream stars on the roster.