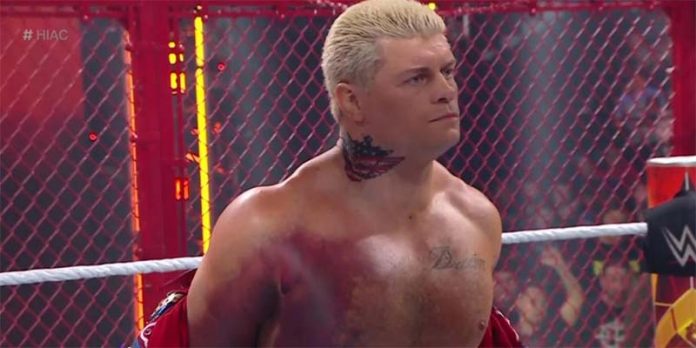 Just hours before the HIAC pay-per-view, WWE announced that Cody Rhodes, who returned to the company just two months ago at Wrestlemania after six years away from the organization, suffered a torn pec muscle, but would still compete in the main event of the show.

When Cody removed his ring jacket to reveal an insane amount of swelling and bruising on his chest, the sold out crowd in Chicago was virtually silent. I’m not a doctor so I’m just guessing with this as some have speculated about why the WWE medical team cleared him to compete with such an injury, but depending on the nature of the tear, I would only guess to say that if it’s a complete tear that prehaps he couldn’t actually do any further damage than what was already done so it was a minimal risk for him to compete at the show.

Aside from the well being of Cody Rhodes, this injury creates many questions about the top of the card for WWE.

It goes without saying that this was probably the worst time for Cody to sustain such an injury, as he was finally on track to be pushed as a top guy and looked poised to become one of the top stars with the shift in focus to him after Roman Reigns recently announced he planned to work a lighter schedule. As I’ve said before, Cody has all the tools to be the world champion that can be promoted as one of the cornerstones of the organization, which he proved that during his tenure in All Elite Wrestling, albeit in a smaller pond. We know that WWE needs to replenish its star power, particularly since Brock Lesnar and Roman Reigns were promoted far above anything else in the organization, with the exception of Ronda Rousey.

A torn pec requires surgery usually puts a talent on the shelf for about eight months, which would put Cody back in the fold around Wrestlemania season next year, but what does the WWE book for the top of the card now?

The previously mentioned lighter schedule for Roman Reigns limits the use of the company’s top heel, and arguably, the promotion’s top baby face just went down with a serious injury so I’d expect the WWE to go into panic mode to shuffle the deck rather quickly. Situations like this are why the 50/50 booking philosophy has so many downfalls since it essentially puts the brand ahead of any individual star and thus true star power becomes a limited commodity. The organization has sold Brock, Roman, Ronda, and nostalgia more than anything else over the past several years. Ironically, the lack of star power doesn’t have anything to do with the level of talent on the roster. AJ Styles and Finn Balor have the talent to be in the main event scene, but given how they were presented more recently, particularly Balor, would they really have the momentum to assume the top baby face spot on Raw right now?

If I had a vote, they should throw enough money at Bray Wyatt to agree to re-sign with the company and give him a big run throughout the second half of the year. Wyatt is a guy that the company not only missed the boat on as a main event talent, but the booking of The Fiend more or less destroyed his career. If he returns, the fans will be happy to see him again, and if the intention to give him a run that the fans think he already deserved before is clear then the audience will get behind the character. By nature, that would be a short-term solution since most of that angle would be based on his return to the company, and obviously, the writing team would have to script meaningful storylines for him next year as well. That being said, considering that Wyatt has done film work in more recent months, it’s possible that he wouldn’t even be interested in a comeback to the WWE, and based on how he was booked for the majority of his career, you can’t blame him.

Again, not that the stock investors are asking my opinion, but if an outside talent isn’t in the cards to restock the void of the Cody injury then I’d suggest that Bron Breakker should get the rocket push to get him into the main event scene on Raw immediately. Bron is a natural, and while there’s only one Kurt Angle, Breakker is in the category in terms of how quickly he learned to be a star on national television. Sure, it’s early and it would be rushed, but I honestly believe Bron would shine in a featured spot on Raw, especially considering the lack of depth for the top baby face on the show. Plus, it really doesn’t make sense for him to waste time in NXT 2.0 because the brand is more or less irrelevant in the grand scheme of things.

The only positive of any of this is that the gutsy performance for Cody to compete with such an injury basically solidified him as a top baby face. Rhodes didn’t have to wrestle, but wanted to deliver on the main event because he was finally booked to be the star that he thought he could be when he left WWE six years ago. Cody showed a lot of heart and determination for a match that will probably be talked about for years. As disappointing as it is that he will be on the sidelines, he will definitely return as an even bigger star after such a memorable performance.

The downside is that the company released dozens of wrestlers in recent years to essentially pad the already record-setting profit margin for the shareholders conference call, but the eventual result of that was a rather thin roster without much depth. The misuse of certain talents, Finn Balor being a key example, doesn’t give the writing team an automatic replacement for the top baby face spot. Seth Rollins deserves a lot of credit for his role in the HIAC match as well. Considering that Rhodes will be on the shelf, it might’ve made more sense for him to get close to a victory before Rollins got the win because now Seth has no momentum, while Cody requires surgery so the short-term progress of the HIAC main event is moot. Rollins couldn’t beat a wrestler that was noticeably injured so what value does he have as a heel?

The biggest takeaway from this whole scenario is that it should be a wake up call for WWE brass as far as how the talent is presented and how to fully utilize the assets on the roster. More importantly, there must be a priority to make new stars for the company.