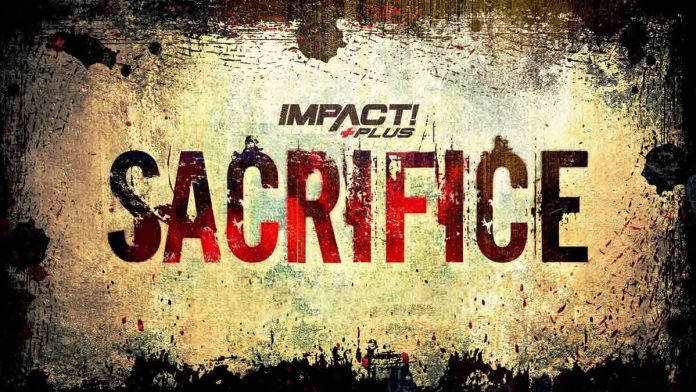 On a weekend that is crowded with well-publicized pay-per-views, including UFC 272 and the All Elite Wrestling Revolution event, Impact Wrestling held its Sacrifice show, distributed exclusively through its streaming service, Impact Plus and its paid Youtube membership. These Impact Plus shows aren’t necessarily promoted as big as the events that are available on traditional pay-per-view, events that have a $40 price tag, but the booking suggests that these are still supposed to be major broadcasts for the company.

The show opened with the typical X-Division title match, which is completely fine because while it’s a recycled concept, it’s a formula that always works since it starts the show off with a fast-paced contest. Trey Miguel has done very well in his role as champion and some of his maneuvers are extremely impressive, including a wild sliding destroy on the floor. Granted, Miguel is more or less typecast in the X-Division, but it’s better to have a specific role than to be lost in the shuffle, especially with the crowded current wrestling landscape. On the other hand, Jake Something is really agile for a big man so hopefully he will eventually get the chance to move up the card. This was a solid match that saw Trey retain at the conclusion.

The Honor No More faction was involved with Team Impact at ringside for the Eddie Edwards vs. Rhino bout. Edwards is always a very good in-ring athlete, and Rhino can still go, but this match was average at best. There wasn’t anything terrible, but nothing spectacular either. This contest and the post-match angle would’ve been better suited for an edition of Impact than any type of premium show. The Steve Maclin interference that cost Rhino the match got a reaction from the crowd in attendance, but when you consider that Impact’s most recent ratings garnered only 130,000 viewers, it’s obvious that only the most diehard of Impact fans will buy tickets to these live shows. The point being, I don’t think Maclin will move the needle for the company now or any time in the future. His name doesn’t have much cache, and the entire ROH angle doesn’t have much steam either, especially after the Tony Khan announcement on Dynamite is what has the ROH-type focus ahead of any spinoffs.

In a similar fashion, there wasn’t much steam for the Knockouts Tag Team championship match either. It was the sports entertainment segment of the show with Kaleb’s involvement and didn’t really bring much to the table, despite the title change at the finish. There wasn’t necessarily anything wrong with the match, just nothing great either. As mentioned The Influence beat The Inspiration to win the belts.

I have to be honest, I wasn’t expecting much from Jonah vs. PCO, but depending what you’re looking for on an Impact broadcast, this was arguably the best match of the night. At 54, PCO understandably sometimes shows his age, but the effort is always there. This contest was wild with bumps on the ramp and dives to the floor. There were physical exchanges and it built toward the finish. The power bomb on the floor was absolutely brutal before Jonah got the victory. Aside from the really good action, the biggest takeaway from this might be that Jonah looked like a star so you have to wonder if management has bigger plans for him? Considering how agile the former Bronson Reed is, he’s a unique athlete that the company could showcase as a commodity so it will be interesting to see what he does next in Impact.

If PCO/Jonah didn’t steal the show then Jay White vs. Alex Shelley definitely took the spot for the best match of the night. Everything in this bout was crisp and solid with a well-paced contest that showcased just how smooth these two are inside the ring ropes. That being said, Alex Shelley is one of the most underrated competitors of his generation and with as many options are they are currently in the industry, it was disappointing that he was almost completely away from the business in recent years. The bottom line is, someone as skilled as Alex Shelley should have a full-time job in professional wrestling somewhere so hopefully he will get a rejuvenated run this year. It goes without saying that Jay White is one of the best in-ring performers currently in the sport, even though most North American fans aren’t as familiar with him because the vast majority of his career, including his biggest matches, were in Japan. Despite being featured on AEW programming and his current stint in Impact, I’m not sure if this run in America will translate to much for White’s career outside of Japan. All things considered, White’s focus is rightfully on New Japan so this run in the United States seems like more of a detour when there’s still a lot of uncertainty with the pandemic in Japan. Jay White got the win, and this contest would be a great bout in any company.


Chelsea Greene answered the challenge for Deonna Purrazzo’s Ring Of Honor Women’s championship, and I didn’t expect a lot from this bout, but it was a good match-up. There were a lot of good technical exchanges early, something that you don’t expect to see from Greene because most of her tenure in Impact previously was based on stellar character work. Greene did a nearly disastrous dive through the ropes, but Purrazzo made the save so her opponent didn’t get spiked on the floor. The history of Greene’s wrist injuries was used for a worked injury angle that led to the finish that saw Purrazzo retain the belt.


Mickie James made the save, and that led into her Knockouts title defense against Tasha Steelz. For whatever reason, Chelsea stayed at ringside selling her arm, which was rather awkward and didn’t make much sense. More than anything, Greene just standing around took some of the focus off of the in-ring action and actually took away from the selling of the injury. It made you wonder if she was there to eventually get involved in the match, but she went backstage about half way through the contest. The match itself went too long and dragged at some point. The finish with Tasha hitting the cutter off the ropes for the victory was a good spot to win the belt, but overall, this bout built very little momentum throughout it.

The tag team title match was very well done and had a lot of action. It makes me wonder if The Good Brothers dropped the belts to make room on their schedule for a full-time return to New Japan? More than anything, this tag title win for Violent By Design puts some spotlight on Joe Doering, who I still think has the potential to be a main event guy in Impact. A side note, there were regular Bullet Club references made throughout the show, but the stable doesn’t have nearly as much hype around it as it did a few years ago so I’m not sure if there’s much buzz to be generated from what happens with the faction in Impact.

Speaking of the main event, I’m guessing the narrative was supposed to be Heath as the sentimental baby face getting a chance to win the championship, but that didn’t really translate because nobody watching thought that he had a realistic shot to win the title. The match itself was fine, but more of an Impact match than a pay-per-view main event. It was just a basic match where Moose won with the spear. Josh Alexander made his return to set up a title match at the next pay-per-view, and as I’ve written before, I think Alexander has all the skills to be the champion.


Despite a few really good matches on the card, this show still had a rather moot atmosphere to it. The crowd was into the action, but it was still a very small audience with just a few rows on each side of the ring. In many ways, Sacrifice looked like an independent show with better production, but still had the lowest production value among the major organizations in the United States. I understand that Anthem bought the company a few years ago to keep in on its networks in Canada and that still might be the main reason the company exist. Don’t get me wrong, Impact has some good performers on its roster, but as I said before, with 130,000 viewers for a recent episode on their television show, Impact Wrestling just doesn’t make a major “impact” on the industry with all the other news around the other companies.