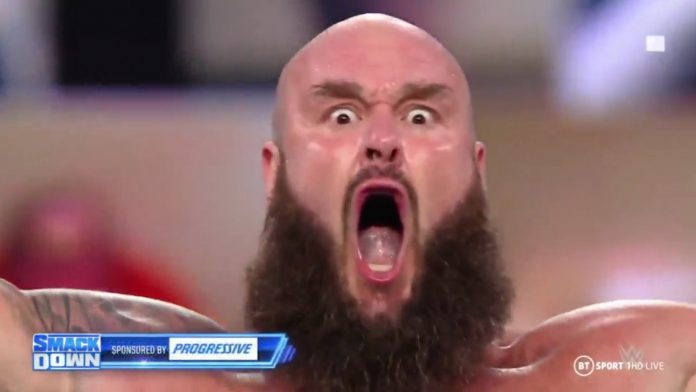 This afternoon, some shocking news hit social media as the WWE announced that it released six wrestlers, with Braun Strowman being the most surprising of the half dozen athletes to get fired from the organization. This news comes after it was reported online that there were more impending budget cuts, but most expected those to be rather mundane releases of developmental talent. Ironically, this is another move that was done more to appease the stock price than anything since it will be categorized as a cost-cutting measure, but it certainly makes a different statement about the WWE structure in terms of the ability or lack thereof to produce money-drawing stars.

Lana, who was put through a table more times than Vince Russo booked pole matches in WCW, was released. In truth, it’s surprising that it took this long after Rusev’s exit and it seems like she was intentionally booked for scenarios that didn’t emphasize her talents. Listen, the effort was there, but was there ever going to be money made from her as a wrestler? That’s not a jab against her, but rather to point out that not every figure on the show should or has to be in the ring. Lana had the mic skills and the presence to be a tremendous on-screen character as a ringside valet. It’s a drastic comparison, but Ms. Elizabeth is one of the most well-known characters in the history of the business, would her run have been as memorable if she was put in the ring to do arm drags? For a more contemporary example, Paul Heyman is arguably the best talker in the industry and can generate more money with his gift of gab than the vast majority of high spots and five-star match ratings, but that doesn’t mean he should be booked to drop an elbow off the top rope.

Aside from the fact that Lana was completely miscast as an in-ring competitor, the way she was used as a wrestler did absolutely nothing to establish her on the show and did more to hinder her progress as a performer than anything else. Obviously, it would be natural for her to reunite with Miro as a duo in AEW, and with the solid push that he has right now as TNT champion, it opens the door for a presentation that would allow Lana to use her mic skills to the fullest potential.

Aleister Black getting the pink slip is very surprising as well, mostly because he just resurfaced on WWE programming after an extended absence to seemingly start a feud with Big E on Smackdown. This is where the release goes beyond just the specific performer and speaks to the status of the structure of the company. How disjointed or fragmented does the WWE process have to be if a performer is penciled in for a return to television, started a new angle on television, and then gets released before there’s any payoff to the storyline? If Black was given his walking papers before his return to TV then it’s simply that management didn’t have anything for him to do. Even if that would be a misguided notion because of how talented he is, at least the logic is there that if the writing team doesn’t have a role for him then there’s no reason to keep him under contract. However, the fact that the storyline was started and will now be dropped suggest that the WWE process is very unorganized. In my opinion, Aleister Black is money because he could go in the ring and he had depth to his persona. That said, I don’t think you can automatically assume that he will ink a deal with All Elite Wrestling because there are too many on the roster already, but New Japan might be the landing spot for him, especially after travel restrictions are completely lifted in a few months. To say that WWE missed the boat on him would be an understatement because how much of a chance did he really get during his stint on the main roster?

Murphy is another one that you can say a lot of the same things about within the WWE landscape. The guy has the talent in the ring, but wasn’t given much opportunity as a character outside of the Mysterio angle that was abruptly dropped. When he was booked as Seth Rollins’ sidekick, it gave him some TV time, but his role was designed to emphasize Rollins’ gimmick, not to be a featured character. I’m really not sure what’s next for Murphy because there are many talented athletes on the market, and he didn’t really get the chance to showcase anything more than solid in-ring skills, but there are already many performers that can go inside the ropes so where he goes within the current wrestling landscape remains to be seen.

Santana Garrett was under the WWE umbrella, but she wasn’t a major focus of TV or any storylines so her release isn’t a factor in the grand scheme of things.

Ruby Riot, similar to many of this lists, goes under the underutilized category. For whatever reason, despite the in-ring ability and the look to be a star, she was only used sporadically as a featured performer. In many ways, after the Riot Squad was originally disbanded for no particular reason, she floundered for the majority of her WWE tenure. That said, I’m not sure where she signs next, but she will unquestionable show up on another major platform because she has the skills to be an asset to any roster.

In terms of star power, Braun Strowman is the biggest name on the list and the biggest surprise released, based on how prominently he was featured on television in recent weeks. Last year at Wrestlemania, he pinned Bill Goldberg to win the Universal title. There story of Braun’s career will probably be how it was mishandled at various key points. When he was the most over in his career, he was booked to play second fiddle to Roman Reigns for the forced baby face push that fell flat. When the fans wanted to see Braun in the main event, he won the tag titles with Nicholas, a 10-year-old fan in the audience that was actually the real-life son of WWE referee, John Cone at Wrestlemania in 2018. Of course, a few years later, Braun randomly turned heel to attempt to try to get Reigns over as a baby face again. When WWE brass finally booked Braun as the champion, the momentum was lost and they missed the opportunity to truly make him a major star. The random heel turns and lame segments take away from how over he was as a monster character. The infamous swamp fight didn’t do him any favors either. Granted, Strowman had his share of injuries in the past few years so maybe that was one of the reasons for the release from the company.

All that being said, depending on the path some of these stars take outside of the WWE, the releases could ultimately say more about the WWE’s lack of ability to utilize talent than anything else.