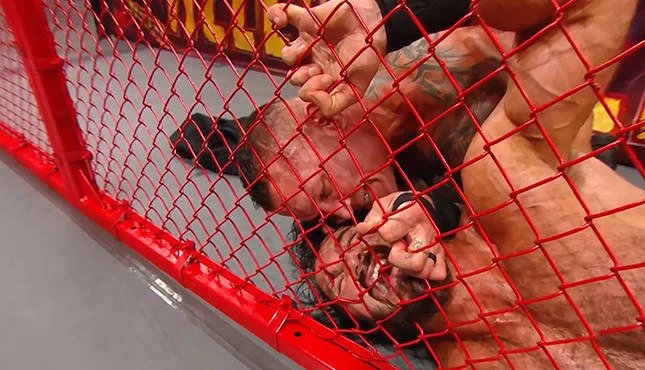 Most of the HIAC pay-per-view this past weekend was a card built on recycled concepts. By nature, the gimmick show dilutes the stipulation because the calendar, not the feuds determined that certain matches were booked for the cell. With the exception of the main event, the key matches weren’t really anything more than what we’ve already seen. As talented as Sasha and Bayley are, they’ve had such an extensive and often inconsistent history of matches that at this point, it’s more of a “been there, done that” atmosphere to it. The booking of this feud, both prior to the start of the pandemic, as well as during it, wasn’t set up in the most efficient way possible. This didn’t really have the heat of a long term feud that culminated in a HIAC match, but rather was just another Sasha/Bayley match that just happened to be a gimmick contest. I’m not sure if its a lack of depth in the division of just how poorly Bayley’s original baby face run was on Raw a few years ago, but it goes without say that both of these athletes have the talent to be much bigger stars than they are right now.

In a similar fashion, the Roman Reigns/Jey Uso bout was more or less a carbon copy of the exact same narrative from their PPV match last month with the addition of the cell to attempt to differentiate it. You can add gimmicks, but if the narrative is the same, where’s the progress of the angle? If a viewer didn’t watch the show, did they really miss any key points of the angle? I’d suggest that Roman’s more physical beat down of Uso in their prior match was more effective than the presentation of the HIAC match. Afa and Sika being there was a neat addition, but if Roman just viciously beat members of the family, why exactly would they congratulate him? Obviously, The Wild Samoans aren’t going to be cast as heel because their legendary status makes them baby face by proxy so while I get what they were going for with this segment, it might’ve worked better if it was done before the match instead of after it. With the Usos being forced to align themselves with Reigns, the silver lining might be the eventual emergence of a heel Samoan stable, which could be money, especially after crowds can return to events. Still, it looks like the HIAC finish is a way to plant the seeds for a Roman/Rock match at Wrestlemania, which might be the biggest match the company could book during the current era.

A side note, Bobby Lashley beat Slap Jack in a squash match, and despite its reveal only a month or so ago, the Retribution stable is more or less worthless, making the entire build up and more importantly, the TV time invested into it worthless. This group was pushed as if it was going to challenge they entire company, but in the span of weeks, they get beat down by Bray Wyatt and then Slap Jack is booked like Steve Lombardi against Lashley so how exactly is the faction a threat? If I had to guess, I’d say that the angle was started without a clear plan or destination for where it was going, lending validity to online reports that Raw is often rewritten just hours before the show goes on the air. Management might’ve realized how goofy the masks and the gimmick are portrayed on TV and decided to phase it away from the spotlight on Raw. The biggest problem is, the athletes that are involved in the stable will have the “stain” of the failure on them. Yes, I understand that they wear masks and were given different names, but the addition of social media in recent years makes it very easy for even the most casual fan to find the information about who was booked for the faction. Also, when the Nexus angle tanked, a few of those competitors had to exit the company to try to get a fresh start in their careers. Plus, some of the former members of the Spirit Squad are probably still in the witness protection program.

The “progress” of the show was made with Randy Otron’s victory to capture the WWE championship. The match itself was fine, but nothing too spectacular. Granted, it’s possible there’s a major payoff down the road, but I don’t see how Orton winning the championship is beneficial to anyone. I know Drew McIntyre won the Rumble before the pandemic and the shutdown occurred after his bout with Brock Lesnar for the championship was already promoted so they had to go through with the title change, even though the empty building didn’t provide a WM moment for him. That being said, without an audience, there wasn’t a way to truly gauge how over Drew would’ve been as WWE champion. Furthermore, the most important aspect of this, is Drew McIntyre a bigger star after six months as champion during the pandemic than he was previously? It’s disappointing to say this because he didn’t get a fair shake with the global pandemic, but I think the answer is no. Again, most of it was because of the lack of a crowd, but the point being, Drew had six months with the title and didn’t get a chance to elevate his stock. This isn’t meant as a jab, but would Drew move the numbers on a drastic level when fans return?

This is just my two cents on the matter, but I think management made a key mistake with this title switch because if things are so limited in terms of TV presentation without a live audience, why not keep the title on Drew and at least get the long term title reign to tout as one of his accomplishments? Don’t get me wrong, Randy Orton is an established star, but Orton is already as over as he’s going to be for his career. For a company that has relied on part-time stars to bring sizzle and hype to the product for the past several years, is Orton the answer to build for the future? I just don’t see how Orton brings anything new or useful to the product with another title reign. That’s not meant as a criticism, but rather to point out that his status is solid and he doesn’t need the title at this point in his career. Unfortunately, Orton’s overall presentation is also somewhat recycled because he has the same look, music, and move set that he had over a decade ago. There’s also the matter that as great as he is, Orton clearly has matches where he mails in the performance and other contests when he takes it to the next gear. How many truly memorable matches has he had during his career?

Since the environment around the product is so flat during the pandemic era, Drew didn’t get a chance to truly been seen in a different light in terms of being promoted as a main event star. I can’t emphasize this enough, I’m not saying that Drew can’t be a top guy, but he certainly wasn’t perceived as main event star during his run as champion. I’m not sure he had the chance to connect with the audience enough for there to be a demand for him to get a rematch either. The bottom line is, the title switch didn’t need to happen and Orton as champion doesn’t exactly progress the company. As far as future stars, the last legitimate money-drawing star the company made is still John Cena and he has been a part-timer for the past several years.