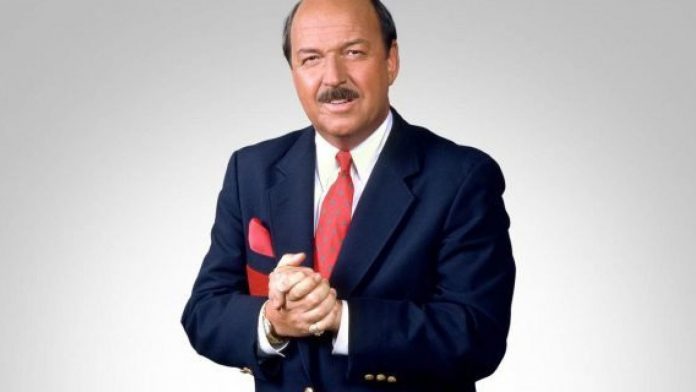 WWE Hall of Famer “Mean” Gene Okerlund has passed away at the age of 76.

Okerlund, who was often referred to as “Mean Gene,” was among WWE’s most recognizable faces for decades, working as an interviewer, announcer and commentator.

WWE did not specify the cause or manner of Okerlund’s death. Okerlund’s son, Todd Okerlund, told The Associated Press that his father died early Wednesday at a hospital in Sarasota, Florida, near his home in Osprey, Florida, with his wife, Jeanne, by his side.

Todd Okerlund said his father, who had undergone three kidney transplants, fell a few weeks ago “and it just kind of went from bad to worse.”

Todd Okerlund also told the Star Tribune in Minnesota that his father died at 5:30 a.m. in an emergency room. In addition to three kidney transplants, Okerlund had “a lot of different issues” leading to his death from natural causes.

Okerlund was born on December 19, 1942, in Sisseton, South Dakota. After studying broadcast journalism, Okerlund landed a job as a disc jockey at KOIL, a popular radio station in Omaha, Nebraska. Okerlund would later move to Minneapolis, Minnesota working for a local television station working in the front office.

While living in Minneapolis, Okerlund began working for the American Wrestling Association (AWA) in 1970 as a fill-in ring announcer and interviewer. He would later take over the full-time interviewer job.

While in the AWA, he got the name “Mean Gene,” which was coined by fellow Minnesotan, Jesse “The Body” Ventura. He stayed with the AWA for 14 years.

In 1984, Okerlund made the move to the WWF where he became as recognizable as the wrestlers he asked the tough questions to, including “Macho Man” Randy Savage, Bobby “The Brain” Heenan and, perhaps his greatest guest, Hulk Hogan. Countless interviews with Hogan included the phrase, “Well you know something ‘Mean’ Gene!”

Announcing wasn’t all that Okerlund could do with a microphone, as he performed the United States National Anthem at the first WrestleMania in 1985. Later that year, Okerlund would sing “Tutti Frutti” on WWF’s The Wrestling Album.

After nine years with the WWF, Okerlund joined WCW in 1993, where he continued to interview many of the legends he worked with before as well as the likes of Sting, Diamond Dallas Page, and Goldberg. He remained with the company through March 2001, when the WWF purchased WCW’s assets.

Okerlund immediately returned to the WWF in 2001 (renamed WWE in 2002) to call the Gimmick Battle Royal at WrestleMania 17 along with Bobby “The Brain” Heenan. He would go on to host WWE Confidential in 2002, which lasted for two years.

When WWE Confidential ended, Okerlund continued to appear on WWE television programming. While he didn’t appear regularly on Raw and SmackDown, he often acted as a host and narrator for many WWE side projects, including DVDs and WWE Network content.

Okerlund was among the stars on the WWE Network reality series Legends’ House, which aired in 2014 and featured other WWE Hall of Famers, including “Rowdy” Roddy Piper and “Hacksaw” Jim Duggan. He also hosted WWE Vintage, an international program which showcases archive footage from the extensive WWE video library. As of late, he co-hosted the program with Charly Caruso, and their latest show was televised a few days ago.

Okerlund was inducted into the WWE Hall of Fame in 2006 by Hulk Hogan.

Okerlund is survived by his longtime wife, Jeanne, and son, Todd.