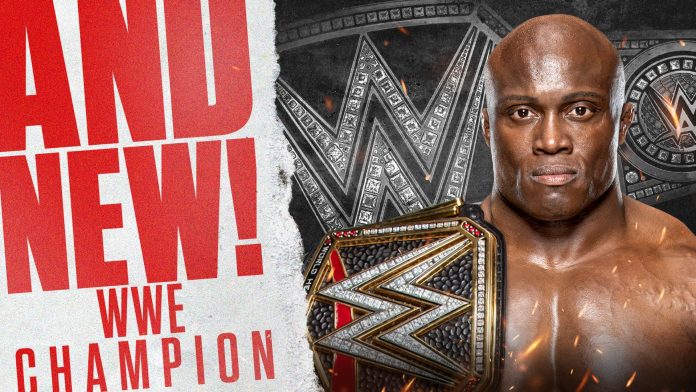 This past week on Raw, Bobby Lashley unseated The Miz as WWE Champion, finally obtaining the status of a top-tier guy, a level that WWE management saw for him when he was originally inked to a developmental deal several years ago.

Signed to OVW in 2004, Lashley had a highly-touted amateur background and was thought to be on his way to the Olympics before an injury derailed that path. Around the same time that Brock Lesnar, who was dissatisfied with the travel as a full-time WWE star, was on his way to exit the company, WWE management had a similar prospect with a similar background so perhaps that’s why Bobby was rushed to the main roster the following year. In truth, WWE brass didn’t allow Bobby the time to develop as a sports entertainer, and he always seemed to be just a step behind in the pace that they tried to push him as a main star on television.

Keep in mind, Lashley had just over a year of training before he ended up on Smackdown so there was always somewhat of a learning curve in his initial run with the promotion. Furthermore, the booking that was offered to him did him absolutely no favors, and if anything, made his path in the organization more difficult, as most scenarios hindered, not helped his star power. Famously, Lashley was paired with the late Umaga for the “Battle of The Billionaires” match that saw Vince McMahon and Donald Trump represented in a hair vs. hair match. Some might say that Lashley’s involvement in such a high profile match would’ve put a spotlight on him, but his role in the angle was secondary, and almost anyone on the roster would be overshadowed by a stipulation where Vince McMahon gets his head shaved in the ring. Of course, there was the infamous ECW title win, and while nobody got over because of how bush league the WWE version of ECW was presented, the association of a Lashley title win at December to Dismember, considered by many to be the worst pay-per-view in modern history, didn’t help his star power either.

I have to be honest, when Lashley left WWE and pursued MMA, where he garnered a 15-2 record, I didn’t think he would achieve the same level of popularity of Brock Lesnar, but I thought he would finish his athletic career as an MMA fighter. Even with the deal he signed with TNA, I figured he was taking the easy money for a few days of work between training for fights. That said, when he competed in Impact and seemingly had a successful formula, again, I didn’t expect him to return to WWE, simply based on how flat his run was there before.

Ironically, when Bobby did return to WWE in 2018, somehow the office picked up where they left off with the same trends of how they misused the tools that he brought to the table. Bobby was never known for his promo work and because he was rushed to TV so early in his career, he didn’t seem quite comfortable on-screen. He just didn’t have the charisma or at least the presentation of a main event star. Once again, he was booked in less-than-favorable circumstances, as he was singing on Raw with Elias and made to look silly instead of a dominate contender. The horrendous Lana angle could’ve ruined his career, and is probably some of the worst TV in the modern era.

As far as pushing a star, management should take note with how they portrayed Lashley in The Hurt Business and apply those core concepts across the board in the WWE. Lashley is a soft-spoken person in real-life so they gave him a manager to cut the promos with MVP, who has arguably done the best work of his entire career with this current run. Bobby was consistently pushed strong on television and was protected in the way he was used, specifically he wasn’t subjected to the notorious 50/50 booking that has neutralized the majority of the star power on Raw. Even when Lashley dropped the US title, it was in a triple threat match to maintain his status as a threat on the brand. Basically, Lashley was presented as a star throughout the duration of The Hurt Business stable and because of that he’s now a legitimate main eventer on Raw. If the writing team avoided some of the foolish mistakes that are often seen within the product, there would probably be more star power on the show.

As far as the direction to Lashley as champion, a lot of it appears to still be up in the year, but at least it creates a level of intrigue ahead of Wrestlemania 37, which has lacked any buzz ahead of the show. I’m not sure what the point was for The Miz to hold the belt for a week as a transitional champion because that role is usually used to transfer the title between two baby faces, but Lashley is cast as a forceful heel so The Miz involvement seemed rather pointless. Sure, some might say the cash-in sets up for a Drew vs. Lashley match at WM, but management could’ve gotten to that destination without Drew dropping the title for the second time in the span of just a few months. I don’t think it can be understated how much the start/stop aspect of Drew’s reign as champion can affect his momentum as a top star.

In fact, the title win has shifted some of the narrative around the WWE title because there’s some speculation that the rumored Brock/Lashley match, which was discussed among fans for years, especially with their background in MMA could be a compelling match at WM 37. Granted, this could all be to set up Drew with a title win at WM in front of a crowd to give him the “Wrestlemania moment,” but as I’ve written before, it won’t have the same effect because he already won the title on the same stage last year. I don’t see the point of a one-month title reign for Lashley, and another quick switch of the belt to McIntyre wouldn’t exactly be a major push either so maybe management should consider the Lashley/Lesnar bout because it’s the only aspect of the show that has generated any hype around the pay-per-view.