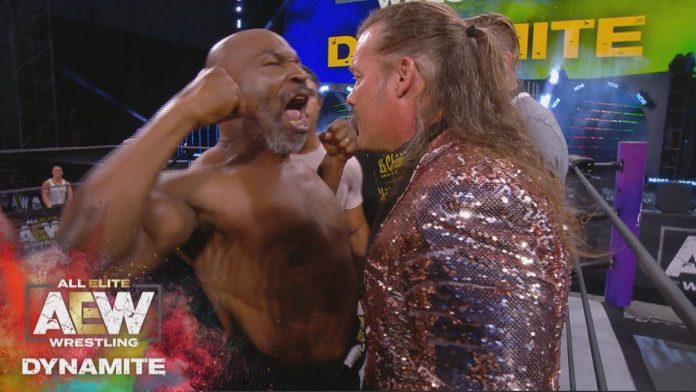 Fresh off of the Double or Nothing pay-per-view and this week’s episode of Dynamite, it appears that All Elite Wrestling is taking steps forward as a promotion. While it remains to be seen how effective the booking direction is, there are certainly several discussion points surrounding the organization. Keep in mind, Double or Nothing was the official launch of the company last year so the event itself was a milestone for the group. The foundation for the start of All Elite Wrestling was the popularity of The Elite and the concept of an alternative option for the sports entertainment industry. Ultimately, the ability to keep that momentum will be key for the company to continue to expanded. Granted, AEW isn’t perfect, but the group has to continue to move forward if they are going continue to have an impact in the industry. It’s often been said that AEW has to learn from the mistakes of WCW and TNA if they really want to capitalize on the momentum they had to start the promotion. Obviously, they have to invest wisely, even if they have a billionaire funding the project, as both of the previous companies showed that a billion dollar bankroll doesn’t automatically translate to success or stability. Secondly, the product must progress to avoid being stalled or stale, which is basically what happened to TNA over a decade ago.

The Dark Order storming the ring to attack The Elite was probably a low point late last year. The segment was tacky and looked like something from WCW in 2000.

Thankfully, many of the flaws from the first two months of TV have been fixed and most of the time, there’s a logical build for angles on television. One of the many aspects of this year is that with AEW’s new TV deal, it’s known that they will be an option for talent for at least the next few years, which saw the debut of Matt Hardy, Brodie Lee, and others. One of the debuts at Double or Nothing was Brain Cage, a former Impact heavyweight champion and an independent standout prior to that. The majority of Cage’s run in Impact was at a time when the group had less exposure than someone in the witness protection program so a move to AEW puts him on a platform with better distribution, especially with the TNT championship as an indication that the network will push the wrestling venture across its programming. That being said, I just don’t see what the big deal is about Brian Cage and I don’t think it’s quite as big of an acquisition as others might say about it. Don’t get me wrong, it’s not a personal jab toward him, if he can get an offer to work on a national TV platform than good for him. But, I’ve always thought his work was sloppy and that his matches were more or less just high spots without any pace to his matches. Plus, he doesn’t have much of a character, he’s more or less a generic bodybuilder that happens to do some flips with less precision than the rest on the roster that work a similar style. The other aspect is that Cage has been injury prone throughout his career, including his run in Impact so it remains to be see if this investment for AEW will payoff. That being said, pairing Cage with Taz makes sense and if it’s done right then this angle could be what his original run as Samoa Joe’s manage should’ve been in TNA several years ago. While neck injuries ended Taz’s in-ring career, his commentary and radio career prove that he does well on the mic and he can still cut intense promos so it was a good choice to give him the spot to cut promos as Cage’s manager.

Hikaru Shida beat Nyla Rose for the AEW Women’s championship at the pay-per-view, which was a good decision because Nyla is still lacking some aspects as far as in the ring, and it was a nice tribute for Shida to win the title in honor of Hana Kimura, who passed away last week. While the division is improving, I think it’s fair to say that the Joshi athletes are far ahead of the rest of the roster, probably because the training in Japan is much stricter than usual seen in the United States. Nyla has the presence of a monster during her ring entrance, but doesn’t have that same aura bell to bell. She sells too much and takes too many bumps to protect that monster image during matches. Sometimes too much selling comes across as clumsy and her character isn’t as impactful as it could be otherwise. I also thought that the No DQ aspect of the women’s title bout was more to camouflage some of Nyla’s weaknesses and it was somewhat overbooking the card because there was already the ladder match and the Stadium Stampede on the same show. Nyla has the potential to be a star for the company, but her character has to be protected going forward if they want to maximize her ability. Speaking of Nyla, Britt Baker was injured during a spot with her on the previous week’s Dynamite and while it’s unfortunate that she will be out of action for 6-8 weeks, the heel work she’s done recently has probably been the best of her career. I mentioned it in an article a while ago, one of the downsides of the NXT system is that very talented athletes could spent a considerable amount of time on the third brand under the WWE banner when they already have the skills to be in front of the biggest audience possible on Raw or Smackdown. The main example of that is Adam Cole, who was the subject of speculation this week that he could exit NXT when his contract expires in a few months. That is another article for another time, but the point being, Britt Baker has learned and found herself with the heel role the past few months. She didn’t have to spend two years on the smaller brand, she took her game to the next level on national television and is arguably able to get the more from this part of her career than she would’ve working the NXT house show circuit. Again, it’s disappointing that she suffered an injury, but she can use this opportunity on the mic to continue to develop her heel character.

The former Revival debuted after months of speculation, which makes the dream match with the Young Bucks possible. As great as it is to see FTR in All Elite Wrestling, and I think they will be extremely successful there, I have to be honest, their debut was rather underwhelming. They made their way into the venue in a truck, just weeks after Cody did a similar entrance before a confrontation with Lance Archer. The in-ring confrontation wasn’t much of a confrontation because FTR and The Bucks disposed of The Butcher and the Blade before the debuting team left the ring. I don’t think there’s really a point to try to question if there’s tension between the team or not and when there might be a conflict between them because the foundation for that was already set up on social media years ago. Something more impactful would’ve been more effective, especially if FTR attacked the Bucks to put them on notice and kick start the feud. I guess, I just think there should’ve been more sizzle for something that has been building for several years.

A segment that didn’t lack any sizzle was The Inner Circle’s confrontation with Mike Tyson. While you can’t realistically expect Tyson to have the same effect on a wrestling organization now than he did in his prime in 1998, the timing worked out well for AEW because Tyson recently made headlines when a series of training videos prompted speculation that he could make a comeback to boxing. Obviously, Tyson isn’t polished at promos and his over enthusiasm doesn’t necessarily lead to the smoothest segment, but Jericho kept it on track. The visual of the scuffle and Tyson being restrained with a cast of UFC fighters could be very useful for AEW. Does this mean Dynamite will set record ratings next week? No, but it could get some of the causal wrestling fans to sample the product, which is key to build the fan base for the company.