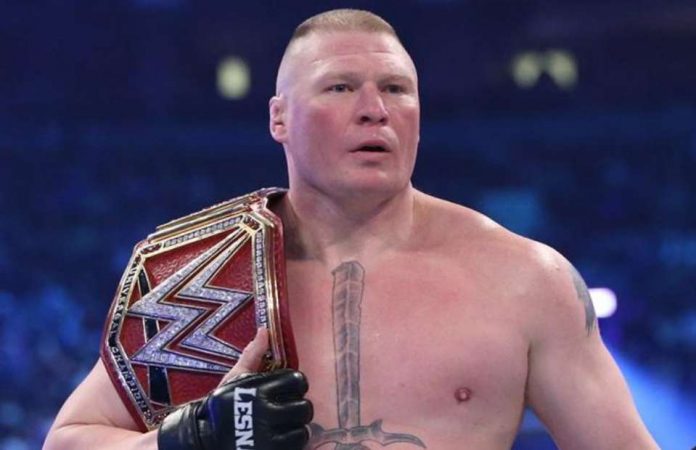 Brock Lesnar, the former WWE and UFC champion, was trending on Twitter today after PWinsider’s Mike Johnson reported that the former MMA star’s contract with WWE expired, making him a free agent. This news was reported just days after his merchandise was removed from the WWE Shop website, which might’ve been more of a technicality than anything if an official deal isn’t signed. Obviously, there’s much speculation about where Brock could land next because the NCAA titleholder has made no secret that he works for the highest bidder so theoretically, anyone that can meet his price tag would be in the running to ink him to a fresh contract.

The biggest hurdle for any organization is, how do they use Brock, especially without the verbal suplexes of Paul Heyman, and would the hefty sum it requires to get a deal done be worth it?

With Roman Reigns as the new “Paul Heyman guy,” which was a wise choice because it gives Roman more of an organic chance to get over, it appears that Brock isn’t involved in the immediate plans for WWE anyway so perhaps the lack of a formal contract was simply a way to avoid paying him a downside guarantee just to sit on the sidelines until there’s an opportunity for something meaningful for him to do. On the flip side, Reigns being paired with Heyman might also be an indication that WWE looks to move away from the Lesnar brand. I penned an article roughly three years ago about the diminishing returns of the Brock experiment and how I thought that the lack of a champion to build around on Raw led to a program that lacked direction. I’m still not sure the investment of such a limited schedule for one of the highest paid members of the roster was worthwhile because Lesnar’s dominance within the WWE over the past several years didn’t spike the ratings or really make anyone else a bigger star after they worked with him so what was the payoff? Granted, Brock made relatively easy money in the process because he showed up less than anyone and got paid more than everyone so it paid off for him. Don’t get me wrong, if Brock can negotiate that deal then good for him, that’s capitalism. However, you have to consider, is the company better off after Lesnar’s run? How many other stars were made from either working with him or during his time at the top of the company? You can’t credit him for WWE’s massive TV contract from last year because that was made possible by the demand for live sports content, not any specific stars.

One of the biggest criticisms of the modern era is the lack of compelling television and the ceiling that kept certain competitors at a specific level, despite how over they might’ve been with the audience. In truth, management’s philosophy of “Brock as a special attraction” looked to be more of a crutch than anything else when the organization didn’t provide intriguing angles that gave the audience a reason to want to tune into the show on a regular basis. In fact, the ideology of Brock’s “rare appearance” unintentional created a scenario that allowed viewers to potentially skip weeks of programming without actually missing any key elements within a storyline because most of the content of the shows seemed to pass the time between Brock title defenses. The scenarios became repetitive and stale, the same way Brock’s matches began to follow a relatively uninspired pattern.

All of this should be considered for a new contract offer because the WWE audience has more or less seen the Brock Lesnar routine so what else is there for him to do at this point? Because of his price tag, he’s not going to be moved into a mid-card feud, and he already worked a limited schedule in the title picture so unless WWE brass wants to repeat the same scenario from three years ago, what would they book Brock for now?

If not WWE, would Lesnar sign with another organization?

Of course, there were tweets suggesting that Brock could make his way to All Elite Wrestling, but while Tony Khan certainly has the resources to meet his price, would it be a wise investment? Again, the same reasons that Lesnar might’ve done all he can do in WWE would be why it could be seen as just a retread in AEW. Is Lesnar going to suplex Jon Moxley ten times in a repeat of Wrestlemania 32? The fans have seen the Lesnar playbook so would they be clamoring for the same routine on a different channel? Plus, when Dynamite was renewed for an extension of the TNT deal, it made AEW profitable, which is the most important aspect to any business. Would Lesnar under the All Elite banner actually generate enough revenue or publicity to justify a major contract? I’m not sure of the answer and I’m not trying to imply an answer either, but Tony Khan would have to take a realistic look at the logistics of a Brock deal before he throws around the cash to get it done. Would Brock work for AEW? Absolutely, if they meet his number, Lesnar would be willing to get pinned by Marko Stunt, and there’s nothing wrong with that because again, the entire point of business is to make money.

There are a few rumblings that the former UFC champion might consider a return to mixed martial arts, either for the UFC or the Viacom-owned Bellator. I would be very surprised if Lesnar completed in the sport again. At 43, Brock is older than most of the competition, and mostly importantly, he retired from fighting because he didn’t like to get punched in the face so there’s always easier money to be made in sports entertainment. Another aspect to consider if that Bellator doesn’t generate enough revenue to get to his number, and the UFC is actually doing decent PPV numbers on ESPN+ already because of the demand for live sports this year.

Technically, Japan could be an option for Lesnar for perhaps a one-off appearance for big money, but that’s doubtful because New Japan would be the most logical option and the office probably wouldn’t even consider bringing him back after his run there when he quit the WWE in the early-2000s. After Lesnar’s football tryout flopped, he worked for New Japan and won the IWGP title, but refused to drop it and it was a source of major controversy at the time.

While it’s definitely fun online chatter to speculate about what Brock might do next, the reality of the situation is simple. Brock has made enough cash that he’s not going to leave his farm unless he gets paid major money. As mentioned, it’s probably not worth the cost for AEW to sign him, and WWE has the revenue from their TV deal to throw enough money at him just to keep him away from AEW if necessary. I’d guess that you will see Brock show up on WWE TV again when there’s a storyline for him, and it will probably be a recycled angle that was used a few years ago. Plus, with the boarder closed, Brock quite literally isn’t going anywhere until the pandemic is resolved, which might be the main reason WWE didn’t rush to get a deal signed.