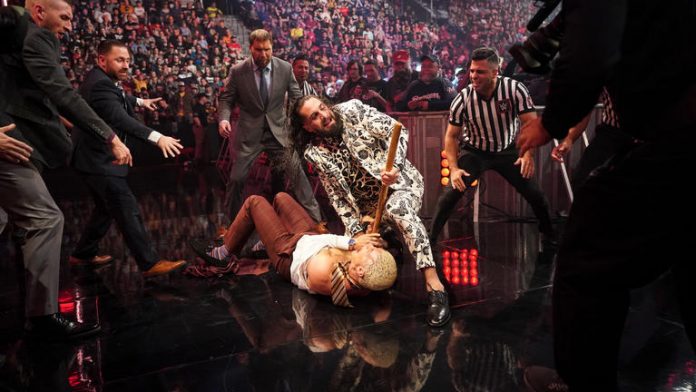 Sunday night, Cody Rhodes competed inside Hell in a Cell with a legitimately torn pectoral muscle. The man’s shoulder, chest, and arm were dark and very hard to look at the shade of purple, and he was clearly in real pain for the entirety of the matchup. The debate has gone wild for the last 48 hours or so since the match took place over whether or not Cody should have even been allowed to compete, with some saying he couldn’t damage it anymore. If it was his call to go out there then it’s on him, while others questioned WWE’s doctors for not stepping in and telling him to sit this one out. Nobody would have blamed Cody for not competing, given the circumstances. Still, he persisted, reminding fans that this was his choice to compete through the injury, and he was more than willing to suffer the pain for the entertainment of those who came to see the show. Going out there at all was bold, going out there and completing a Hell in a Cell Match in that condition was admirable, but going out there and putting on an instant classic and a match of the year candidate given the circumstances is otherworldly. Seth Rollins deserves his flowers too, being able to navigate those tough waters with Cody together. Regardless of where anyone stands on Cody going on with the show, nobody can doubt that he is a true man of the people, and there should be nothing but respect for being so dedicated to what he loves and who he loves.

But that is not the only reason to be here today. Now that Hell in a Cell has come and gone, Cody will have surgery and miss at least the next 6 months. As WWE’s top babyface, this means they will be without the man most of the summer, and fall of this year was surely going to be built around, especially with Roman Reigns likely missing some time to film a movie. That leaves WWE in a very unenviable spot, and with a gigantic question left to ask: what happens now? That is precisely the question I would like to focus on right now!

In the immediate aftermath of Hell in a Cell, WWE properly wrote Cody Rhodes off of TV to have surgery by getting attacked by Seth Rollins on Raw. Then, in one of the most shocking turns of events, likely stemming from the Cody situation, WWE had the Judgement Day, Edge’s new stable, turn on Edge and, allegedly, turn him back to a babyface while Finn Balor turned heel. It seemed like a very impulsive decision, likely to have Edge now run as the top babyface in WWE while injuries and absences run wild across WWE (and AEW for that matter too, but that is a discussion for another time). The question I have is why Edge is the face and why now? Edge just turned heel a few months ago, and this stable is his baby. He cut his hair, and changed his ring gear and music, a literal 180 from what he was since his 2020 return to WWE. That has all been thrown away now to have him return to being the top babyface, with guys like AJ Styles, Drew McIntyre, Randy Orton, Riddle, and Bobby Lashley likely doing some heavy lifting right behind him. I wonder why one of those 5 alternatives mentioned was not used in the role, considering all 5 are already babyfaces to begin with, and with some proper shine, they could have easily risen to those ranks fairly quickly, allowing Edge to remain as the dastardly heel leader of the Judgement Day, who seems poised to run as one of the top heels acts in WWE alongside the Bloodline. As the brand split seemingly has its days numbered as well, the need for some variety in the shows remains, and those two stables can run as the top heels. Edge being betrayed by his protégé very well should have waited until more of a series of seeds were planted.

Let’s take a look at how those 5 alternatives could have been brought up to the level they seem to ask Edge to be at right now. Firstly, the obvious choice of Drew McIntyre. In 2020, Drew was WWE’s top babyface, leading the charge through the pandemic era and being WWE Champion for the better part of a year across 2 reigns. He is also the likely opponent for Roman Reigns at Clash at the Castle in September, where he could win the WWE Undisputed World Championship from the Tribal Chief. The question is: why not begin that climb now? They already have in many ways, with the seeds firmly sown into the ground on Smackdown, but the only thing I can fathom is that he resides on the blue brand, and WWE has not officially ended the brand split. So, he cannot be the top babyface on Raw if he’s on Smackdown. Hopefully, WWE does keep the shows separate and individualized so as to have some variety, as mentioned earlier, so I can be okay with his omission from this discussion for now.

AJ Styles is the next leading candidate, having returned to babyface status a few months ago against Edge and the Judgement Day since Wrestlemania. AJ’s got one major thing working against him right now: his win/loss record. He has not won a singles Premium Live Event match since 2019 (Super Show Down 2020 does not count since it was a gauntlet and he did not finish as the winner), and he has not won any PLE match of any kind since last July! We’re talking about one of the most gifted wrestlers on the planet right now, and he is not being given any sort of chance, so it is easy to see why he isn’t being held high enough in that regard.

Riddle and Randy Orton are in the same boat: they will likely be steamrolled by Roman Reigns on his way to facing Drew McIntyre at Clash at the Castle. Plus, they have been a tag team for a majority of the last year and change, so their singles statures, while very much viable, especially Orton of course, don’t hold the same candle as they would after a few months back into the singles fold. By then, Roman will have already beaten them, and their chances of being the top babyface get splintered there.

Then there is Bobby Lashley, who also is recently now a babyface and getting very strong and positive reactions from live crowds since the turn. It is very new for him after several years as a heel, though, and having a run at the top as a babyface may seem too forced too soon, and he may not be able to draw at the level needed at this time.

So, on paper at least, the logic follows to have it be Edge, who is a naturally lived babyface and can draw heavy numbers in that role. It just seemed so sudden and almost too soon to split him from the Judgement Day. This is not to say that Finn Balor is a bad replacement or cannot work as a top heel, in fact, I think a strong heel run as the leader here may be the best thing for his character, and maybe even his Demon alter ego, should it appear while he is the leader. He needs something fresh and new, and this could be exactly what he needs. I feel as though Edge’s role with the group had more to give than he had time to give them, so it does feel like a somewhat missed opportunity. Thankfully, the upside for the new incarnation of the Judgement Day provides many compelling options as well.

So, to wrap it all up, let’s take a look at what I think should happen over the next few months as WWE heads all the way through Clash at the Castle in September. Cody was my leading pick to win the Money in the Bank Ladder Match that is incoming, but with him gone, the field will see some new faces and a new winner in my book. Kevin Owens, Seth “Freakin” Rollins, Mustafa Ali, Finn Balor, AJ Styles, Xavier Woods, and Ciampa are my 8 choices to be in the match. Balor and Styles have a ready-made story to tell in the build to the show and in the match itself since Finn essentially stabbed him in the back to join the Judgement Day, and that can be played out as the ongoing story in that match. In the end, those two would be the final two at the top of the ladder, and if Finn is to be the man here like they made it seem last night, then he must win the briefcase and have it as their ace in the hole these next few months. Meanwhile, Roman Reigns battles Riddle and wins there. Then, Edge will return after Money in the Bank to battle Balor at Summerslam and give Balor a huge PLE win as he would go over in Nashville, while Reigns takes down Orton. Head on over to Clash at the Castle, where Balor would once again defeat Edge, and Drew McIntyre finally defeats Roman Reigns to regain his world title after so many attempts, also ending Reigns’ legendary run in McIntyre’s backyard. Unfortunately…he won’t get to celebrate it for long, as Balor should cash in that briefcase that night, and Finn Balor leaves Cardiff as the WWE Undisputed World Champion.

If this is the way they wish to go, then it must be a go big or go home scenario. Coming out of the Cardiff show, Finn can have feuds with AJ and Drew throughout the fall, Roman can get some needed rest, film if he wishes, and maybe have a feud with an Edge type, before returning for a big Wrestlemania feud with The Rock. At the same time, Cody Rhodes will (hopefully) be able to get back for Rumble season and inevitably win the Rumble and dethrone Balor at next year’s Wrestlemania. It is a loose fairytale booking, but one I think would be quite the fun way to work around the tough times WWE has fallen on these last few days!