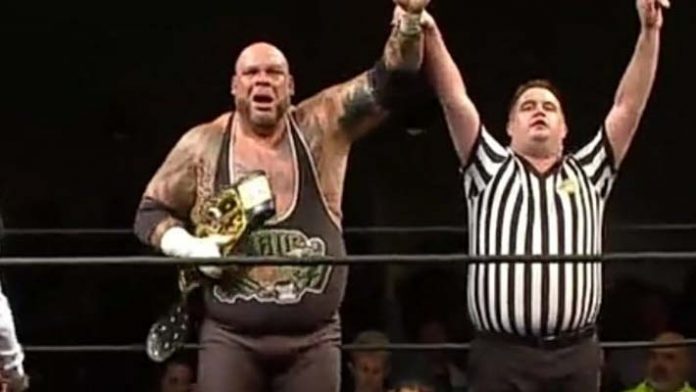 After a slew of independent shows this past weekend, many fans are talking about the National Wrestling Alliance, which held its “Hard Times” pay-per-view in New Orleans, but unfortunately, the chatter around the historic “ten pounds of gold” is for the wrong reasons. In the main event, Tryus, former WWE grappler Brodus Clay, won the NWA World Heavyweight championship after he competed in a three-way bout against Trevor Murdoch and Matt Cardona.

First, it should be noted, and as I wrote a few years ago, Billy Corgan did more to make the NWA relevant in a relatively short time span than the jokers that were involved with it the previous two decades. Without getting into a rant, the vast majority of the organization’s existence in the post-Turner purchase of Jim Crockett Promotions, was based on a few carny nickle-and-dime indy promoters that wanted to leech off of the legitimate history of the initials. The 1994 tournament that was associated ECW was probably the only legitimate chance of reigniting the original brand, but as we know, Paul Heyman and Shane Douglas had other plans.

Corgan, who had a role in the latter stages of TNA before he had to take Dixie Carter to court, bought the NWA in 2017. At the time, I wasn’t sure what exactly he bought other than the rights to the name and the use of the world championship. Keep in mind, the famous Jim Crockett library was included in the WCW buy out. Again, give Corgan credit for making the most of the name, because for a brief time before the early existence of All Elite Wrestling and the pandemic, the NWA Power series on Youtube generated a cult following. That said and also as I mentioned at the time, I just couldn’t put too much stock into the NWA project because the economics of a Youtube platform doesn’t lend itself to a venture that could sustain itself, especially in a pro wrestling landscape that would become more crowded.

Similar to the original Power series, the current NWA product showcases some really solid free agent talent. Matt Cardona, who was completely underutilized during the bulk of his WWE tenure, completely reinvented himself on the independent circuit and looks to be exactly what the NWA needed, considering that he could be the traveling world champion as a throwback to the prior era. Cardona made himself a draw without mainstream television behind him. Colby Corino, Marti Bell, and others have done well on the NWA stage. The studio setup for most NWA shows is really unique in the modern era and has a cool retro look for the broadcast. However, the major downside is that the NWA episodes are about 45 minutes each and costs $4.99 on Fite. Granted, five dollars doesn’t break the bank, but comparatively speaking, when the WWE Network is $4.99 or free in some cases on Peacock for access to thousands of hours of wrestling content, it makes selling pro wrestling more difficult across the board, let alone less than an hour of footage for the same price. Thankfully, the answer to that can be the newly-launched Fite+ service that will include several independent groups, along with the NWA at the $4.99 price point, which definitely gives the Corgan shows more exposure going forward than there was in the past if fans had to pay for individual episodes.

How Fite makes its new service a profitable revenue stream for all of the companies involved remains to be seen, but if the concept gets all the ground, it could theoretically give each league more exposure at a more modern price point.

It’s a harsh reality, but in the modern era, it’s much more difficult to get a piece of the pro wrestling pie so to speak. Even the most diehard fans have a “wrestling budget,” both for the time and money spent on sports entertainment. WWE tries to target a mass audience, marketing its content to the general public to attempt to maximize viewers in an attempt to maximize ad revenue, especially because the broadcast rights already bring in guaranteed money. All Elite Wrestling is still somewhat of the old school modern, as far as the company tries to sell quarterly pay-per-views, albeit at a higher price than in the past, which puts more pressure on the organization to not only sell the shows on television, but to deliver a quality event. By nature, any other product is attempting to carve its own profitable niche, which is possible, but difficult. Despite its previous working agreement with All Elite and a solid roster of its own, Impact doesn’t have enough cache in the sport to truly make a difference within the rest of the industry. The promotion isn’t necessary subpar in quality, but the scope of the promotion is rather minimal in the grand scheme of things. The shows are held in front of small crowds and its television ratings in the United States aren’t comparable to either WWE or AEW. Keep in mind, Anthem bought the group because it was the highest rated show on the Fight Network in Canada so as long as Impact continues to do solid numbers there, it’s doubtful that management would attempt to change the status of Impact. That being said, the NWA in some ways, is similar to Impact, but without television to fuel the product.

If that’s the case, you have to ask, is there realistically room for the NWA in the modern landscape?

Of course there is, if Billy Corgan can find and market toward a target audience. Despite the myriad of talent, I’m not sure the NWA product has truly found its audience yet. Is it supposed to be the old school fans? By nature, that demographic is a niche, and as we know, nostalgia has a limited draw. Plus, Conrad Thompson, the real estate mogul that turned his passion for pro wrestling into a profitable side gig through his podcast network, has promoted retro events around pay-per-view weekends the past few years so that caters to most of the old school market.

If Corgan’s answer is Tyrus as the face of the promotion, the search for an NWA audience will probably continue. Nick Aldis was the champion for most of the time for the past few years, but recently gave his notice to the organization, citing differences with the direction of the product. Corgan responded with claims that the former TNA competitor attempted to politic to win the belt back. In truth, a rift between a promoter and a wrestler isn’t anything unusual. Aldis leaving isn’t an indication for the status of the NWA, but Corgan’s decision to put the title on Tyrus, a nearly 50-year-old wrestler that had a two-year stint as a mid-card comedy act in WWE, might lend some credibility to Aldis’ criticism with claims that Corgan doesn’t know the industry.

Plain and simple, Tyrus isn’t a performer that anyone would identify as a world champion. Was anyone clamoring for that big Tyrus title run at any point in his career before there? How about all those great Tyrus matches that fans think of when you mention his name? What about all those compelling Tyrus promos? Granted, Cardona got hurt and had to relinquish the championship, and Trevor Murdoch was a decent substitute because of his history with Harley Race, but outside of that Cardona should be the guy for the NWA. He markets himself as good as anyone in wrestling and without the restrictions of a national contract, he can work very well in the role of a traveling champion.


Finally, society is politically divided now more than any other time in the history of the country and besides being an outspoken conservative, Tyrus appears frequently on Fox News, which some consider to be an extreme network. There was a reason Micheal Jordan said, “Republicans buy shoes, too” because when a figure is associated with politics, it can sour half of the audience. It might not be fair to judge someone based on their political views, but the dumpster fire of social media is proof just how much of an impact it can have on if people spend their money on a product. There was also a sexual harassment lawsuit filed against Tyrus a few years ago from another Fox host, but the lawsuit was dismissed after the network offered her a settlement.


Tyrus already used his political views as a crutch, tweeting that the criticism of his title win was from “woke trolls,” which will do nothing to help the situation, but let’s be honest here, the negative fan reaction isn’t based on politics, but rather that Tyrus just isn’t over. If he makes money with his “brand” as a contributor to Fox News, good for him that’s capitalism, but that doesn’t mean he will sell tickets for the NWA. Based on the social media feedback, fans just don’t think Tyrus is very good, nobody cited anything based on who he voted for in the elections. On the flip side, someone like Low Ki has a reputation for being difficult to deal with so he might be a jerk, but it’s almost unanimously mentioned that he’s a very talented jerk. Nobody praised Tyrus’ in-ring skills after he won the title.

During an appearance on the Briscoe and Bradshaw podcast, Billy Corgan made comparisons to Brock Lesnar and Bobby Lashley before he mentioned Tyrus and Murdoch, which isn’t exactly a fair comparison. Corgan also said that if fans don’t like the Tryus and Murdoch type of wrestling then don’t watch the NWA. My guess would be that as long as Tyrus is world champion, fans will take Corgan’s advice for the product.