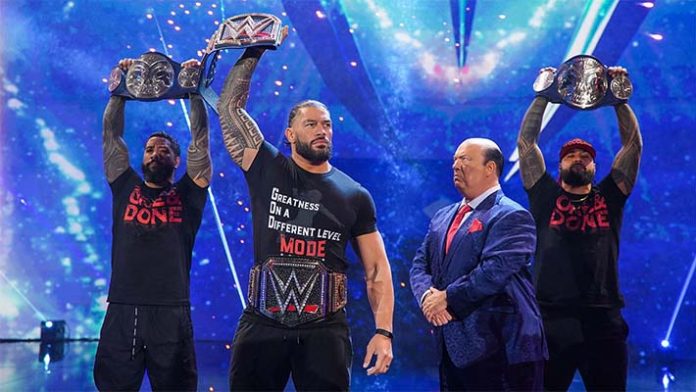 As WrestleMania Backlash comes to an end, one thing remains constant. The Bloodline remains at the top of the WWE mountain. Following Roman Reigns’ win at WrestleMania over Brock Lesnar, one question plagued the WWE Universe, what happens next?

After WrestleMania, Roman Reigns revealed what was next for him and The Bloodline. Reigns wanted The Usos to follow in his footsteps and unify the tag team championships. Reigns sent The Usos to collect the Raw Tag Team Championships from RK-Bro.

Heading into WrestleMania Backlash, the match initially announced was The Usos taking on RK-Bro in a tag team championship unification match. Plans changed, and the match was turned into a six-man tag match, with Drew McIntyre and Roman Reigns getting thrown into the fray.

At the end of WrestleMania Backlash, we saw Roman Reigns pin Riddle to pick up the victory and keep The Bloodline on the top of the WWE mountain. With all of this in mind, what’s next?

If The Bloodline wants to remain on top and prove they are at the top of the WWE mountain, The Usos must win both tag team championships. This wouldn’t be the worst idea either, as the WWE tag team division has been lackluster for the better part of the past couple of years.

As many fans expect, Roman Reigns will be keeping the WWE Universal Championship, and the WWE Championship around his waist for a while. However, after cutting a promo at the end of a house show recently, he revealed his time may be coming to an end, sooner than later.

Let’s say for argument’s sake, he stays with WWE for a while longer, what should be next for the Tribal Chief? At WrestleMania Backlash, they teased a one-on-one match with Drew McIntyre. Heading into Hell In A Cell, that is who should be next on the agenda for Roman Reigns.

Drew McIntyre is really the only person who is big enough to face Roman Reigns. Bobby Lashley is a close second, but he has bigger problems with Omos. Roman reigns and Drew McIntyre is going to be the top rivalry in WWE for months to come. It should be interesting to see how it all plays out.