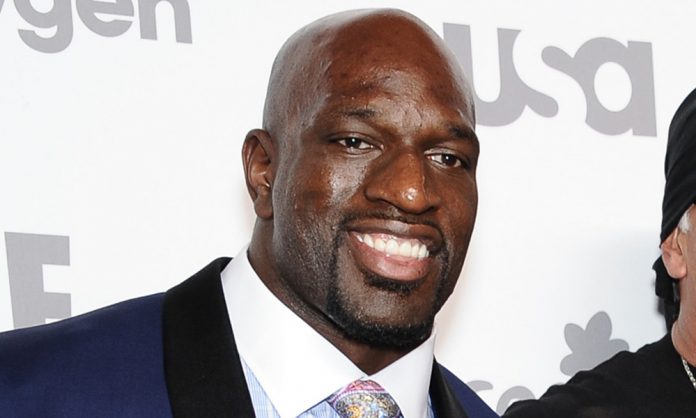 – As seen in the Fallout video above, the latest Titus Worldwide press conference with Titus O’Neil, Akira Tozawa and Apollo Crews took place after this week’s WWE RAW in Toronto with Mike Rome asking the questions.

Mike points out Tozawa’s shoulder and asks how he healed so fast. Crews sort of translates for Tozawa and says he’s just pumped going into SummerSlam to face WWE Cruiserweight Champion Neville. Titus gets the “ah!” chant going before Dana Brooke appears with Titus for the second week in a row. Dana says she’s really excited about joining the group. Titus says he told her last week that she has all the makings of a star and they would love to have her in the group but she has to find herself first because they all know who they are – well respected and well connected. Titus tells Dana to find herself.

– Former WWE Women’s Champion Rena Lesnar (Rena Mero, Sable) turns 50 years old today. Lesnar last worked for WWE in 2004 but has been at recent events with husband Brock Lesnar. She and the current WWE Universal Champion were married on May 6th, 2006 and have two sons together – 8 year old Turk and 7 year old Duke. She is also step-mom to Lesnar’s 15 year old daughter Mya Lynn, who he had with ex-fiancee Nicole McClain. GFW’s Scott D’Amore is also celebrating a birthday today, his 43rd. Today would have been the 89th birthday of former WWE announcer & host Lord Alfred Hayes. Hayes worked for WWE from 1982 until 1995. He passed on July 21st, 2005 at home in Texas after suffering a series of strokes.

– Emma continued her “#GiveEmmaAChance” campaign this week after losing the RAW Triple Threat with Sasha Banks and Alicia Fox in Boston. As noted, Sasha won that match and will now face Nia Jax on next week’s RAW to determine the SummerSlam opponent for RAW Women’s Champion Alexa Bliss. She also used the hashtag in a post before RAW.

You gotta be kidding me! I had that match won tonight! ? #RAW #WWE #GiveEmmaAChance pic.twitter.com/WJpPJtKErc

After an amazing week in paradise with @AzulikHotel, I'm feeling fresh and ready for #RAW live from Toronto, Canada!✌?#GiveEmmaAChance #WWE pic.twitter.com/LDoZJ1pm1R